Autonomous rover is effectively a 'robot geochemist' utilizing a variety of optics and photonics equipment. 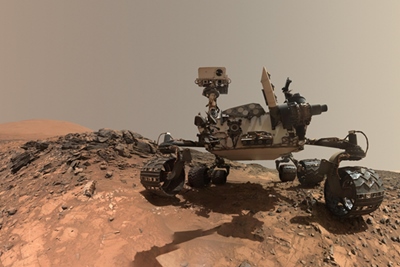 by Ford Burkhart in San Diego
Curiosity, the autonomous rover that arrived on Mars five years ago, continues to solve its own navigation problems, with mission scientists hopeful for another five years of useful activity.

The robot, driving through unpredictable environments of bedrock outcrops, where clear skies can suddenly become blinding dust storms and where clouds can hide the power-giving sun, runs itself as a stand-in for the humans who sent it, and has proven to be very good at its job.

“It’s taking care of itself,” said Charles D. Edwards, Jr., of NASA’s Jet Propulsion Laboratory (JPL), in an illustrated account of the independent-minded lander's adventures on the rough terrain of Mars. “It’s been very productive.”

Edwards was covering the autonomous vehicles topic as part of the “How Optics and Photonics Drive Innovation” opening plenary session of the SPIE Optics+Photonics meeting taking place in San Diego this week. The event runs through Thursday August 10.

Navigational skills
Curiosity has sent back data showing that the region of Mars near Mount Sharp has the necessary biogeochemistry to support the development of life. “It shows the region is in fact habitable,” Edwards said, arguing that the autonomy of the rover has proved essential to its success.

The round-trip time for light - and therefore any signals - to travel between mission control and Curiosity is 45 minutes. “So vehicles must take care of themselves over this time span to be safe,” he added.

Any information sent back to Earth by the vehicle would arrive long after it might have driven off a cliff or into a rock wall. Humans often are of no help, but the rover is smart enough to figure out the exact best path to drive between looming hazards.

“We couldn’t explore Mars without that autonomy to deal with the long round trip of messages, for the data to come to Earth and for the commands to get there,” Edwards said. “The more autonomous the vehicles are, the more productive they’ll become.”

That means humans were relegated to watching the video during the Martian “night”, and sending back a new set of goals for the next Martian “day,” called a sol. Each sol, Curiosity wakes up about 9 or 10 am and tackles its new assignments. “The rover is on its own to achieve those objectives,” Edwards said. By 4 pm, orbiters will fly over, video its success, and relay the news to Earth.

“Ultimately, people will become a virtual presence on Mars,” he predicted. “It’s a team arrangement between robots on Mars and the scientists and engineers on Earth.”

The robotic geochemist
The robot is learning to avoid hazards, like sharp pebbles that can damage its titanium wheels. “But it is a contact sport,” Edwards said. “The rover needs to run its drill by itself, without help from Earth. The rover is very capable. It is a robotic geochemist, sampling the planet, with instruments to assess the habitability of the area where it landed.”

In fact, the rover is an entire rolling chemistry lab on the Martian surface, with instruments to allow analysis of the local soil and rocks. One of those is the laser-enabled “ChemCam” spectrograph, which uses the laser-induced breakdown spectroscopy (LIBS) technique.

Edwards showed Curiosity exploring the Gale Crater, formed 3 or 4 billion years ago. Over time, it has eroded, leaving sedimentary deposits. “Thus we are walking through time as we climb through the layers,” he said.

He also showed a rover “selfie” – in all, 50 images stitched together – showing the dangerous geological formations in its path, with tire tracks tracing the decisions made by the robot to navigate between hazards.

The next-generation vehicle, the Mars 2020 Rover, will use new instruments to pick out the most interesting rock targets for potential return to Earth, and will push even further the autonomous capabilities of the vehicles, Edwards said.

Its navigation systems will contain maps of the landing area, and on-board machine vision will look down as it lands, to avoid dangerous spots.

Saturday, August 5, was the actual fifth anniversary of the rover’s landing on Mars. “And we are looking forward to another five years to understand the history of that region on Mars,” Edwards said.