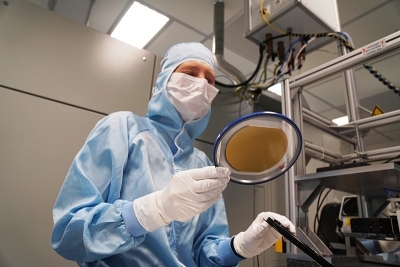 IQE, the London-listed provider of advanced semiconductor wafer materials for photonics and other devices, has confirmed a net loss of £35 million in 2019, following a 10 per cent drop in sales compared with the 2018 figure.

Despite that and the extensive challenges now presented by the coronavirus pandemic, the company remains positive, with production continuing at each of its global manufacturing sites alongside additional hygiene measures and social distancing.

Long-time CEO Drew Nelson said that although down on the prior year’s total, the sales figure of £140 million in 2019 was in fact slightly better than the company’s own internal expectations.

“The outlook for Q2 remains positive at this time,” he added. “IQE remains well positioned to withstand the near-term uncertainty, and we are confident our technology will be a critical part of the world’s technologically driven future.”

Photonics sales up
IQE had been due to report the full results a month ago, but like other companies was compelled to delay the announcement as the impact of the pandemic became apparent in the UK and a lockdown was put in place.

“We’ve had dramatic changes to the way that we work, live, and play,” said Nelson in a webcast presentation. “Fortunately, communications networks, devices, and infrastructure have been a major factor in our ability to cope - personally, corporately, and nationally.”

The CEO pointed out IQE’s critical role in that infrastructure - something that is likely to increase with the global roll-out of 5G communications, which the company believes could be accelerated by governments as part of their economic stimulus response.

The main reason for the decline in sales seen last year was geopolitical, meaning lower demand for RF amplifier components used in smart phone handsets and wireless infrastructure. On the other hand, IQE’s photonics-related revenues rose by 4 per cent, and accounted for almost exactly half of company turnover.

That bump in photonics revenues also came despite a significant loss of volume from one major customer for indium phosphide (InP) wafers suffering from other technical issues.

“Photonics demand, especially for VCSEL and infrared products, continued to grow in 2019,” reported IQE in its annual financial review, pointing out that VSCEL sales had accounted for approximately half of all photonics-related revenues for the year.

The rate of growth in VCSEL sales might not be quite at the level envisaged by the firm a couple of years ago, but it is now being propelled by initial volume ramps for 3D sensing devices used inside Android phones. Over the past couple of years IQE has completed a huge investment in VCSEL epiwafer production capacity at its UK site, in anticipation of that demand ramp.

Short-term resilience; long-term opportunities
Although IQE posted a net loss of £35 million for the year, the company pointed out that a large chunk of that figure amounted to accounting write-downs, as well as £4.3 million in legal costs relating to a confidential patent dispute that IQE’s executives believe is going in their favor.

Looking beyond the headline loss figure and on an adjusted basis, pre-tax earnings of £16 million were down from £26 million in 2018, stated the company.

While Nelson and colleagues stressed the need to be prepared for what looks like an inevitable global recession in the nearer term, they also remain optimistic about future opportunities.

How exactly a recession will impact sales of devices crucial to the operation of smart phone handsets remains to be seen, but there is a hope that 5G infrastructure spending could be accelerated, allied with a desire from both consumers and businesses to refresh their phones to better cope with social distancing measures that may become the “new normal”.

The CEO indicated that smart phone manufacturers were still planning new product launches for later in 2020, and that any delays to launch schedules might be measured in weeks rather than months.

With new generations of phones likely to include features such as world-facing 3D sensors based on VCSELs, and that technology proliferating into lower-spec handsets and applications beyond phones, demand for photonics devices may boom accordingly.

Nevertheless, as part of its efforts to ensure short-term resilience, IQE has agreed new debt covenant terms with key lender HSBC. With credit facilities of up to £57 million now in place, the renewed terms and conditions are designed to ensure continued access to liquidity - even in the event of a “worst-case” downside scenario.