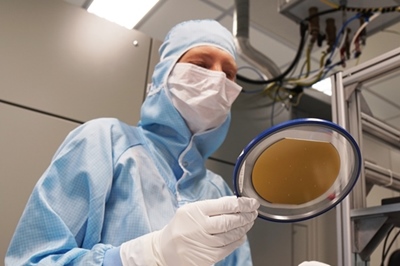 IQE, the London-listed epiwafer foundry, has confirmed a sharp upturn in photonics-related business, and said that it expects the momentum to continue over the coming five years.

And it meant that IQE was able to post a 16 per cent annual rise in its total sales, which came in at £154.5 million – beating the Cardiff-headquartered company’s December 2017 forecast of “at least” £150 million.

“This substantial growth is largely being driven by VCSEL products for mass market consumer applications that ramped through H2 of 2017,” added Nelson. “The depth and breadth of customer engagements in photonics provides a solid platform for continuing strong growth with several new product launches forecast over the next 12-18 months for multiple OEMs.”

The anticipated rate of that growth is remarkable: in its filing to the London Stock Exchange, IQE indicated that it expects photonics sales to jump by anywhere between 35 per cent 60 per cent this year.

That figure is based on VCSEL-incorporating products already in production, as well as ongoing product qualifications. “Market engagement has continued to broaden to multiple Tier 1 OEM's, targeting mass market ramps over the next 12 to 18 months,” IQE reported.

Beyond 2018, the outlook is just as strong, with Nelson and colleagues guiding that sales of epiwafers for photonics applications should grow at a compound annual rate of 40-60 per cent over the next 3-5 years.

If that kind of momentum did continue for five years, it would imply annual photonics-related sales in the region of £350 million by 2023 – more than seven times the current level.

‘Mega foundry’ investment
To meet that potential, IQE is investing heavily in what it describes as a new “mega foundry” close to its existing headquarters. Capital expenditure jumped more than 80 per cent from 2016 to 2017, to £34.8 million, as the company geared up for the boom.

Ultimately, the new site could house as many as 100 new epitaxy tools – creating what IQE describes as a facility “with unparalleled capacity and economies of scale” in the industry.

“The first five tools are now in situ and on track for production in H2 2018 as expected, and a further five tools are scheduled for installation and commission by end Q3,” added the firm. “Preparation is underway to acquire at least a further ten tools within the next 12-18 months as demand requires.”

IQE is also making photonics-related investments beyond the opportunity in VCSELs, including in quasi photonic crystals (QPC) and nanoimprint lithography (NIL). They are seen as potentially useful for a wide range of devices, including distributed feedback (DFB) laser diodes, integrated 3D sensing solutions, and silicon photonics.

In December last year, the IQE subsidiary NanoGaN – originally a spin-out from the University of Bath – spent £0.5 million to acquire a portfolio of 54 QPC-related patents from Taiwan-based LED maker Luxtaltek Corporation.

IQE said at the time that QPC would complement its own developments in the area of NIL, broadening the potential application of NIL beyond that of DFB lasers.

• Despite the strong results and outlook, IQE’s stock price fell in value by around 5 per cent shortly after the company made its announcement. However, at around 135p the company continues to trade close to long-term highs not seen since the telecom boom of the early 2000s.