UAVenture Capital invests in supercontinuum technology developed at the University of Arizona’s influential school of optics. 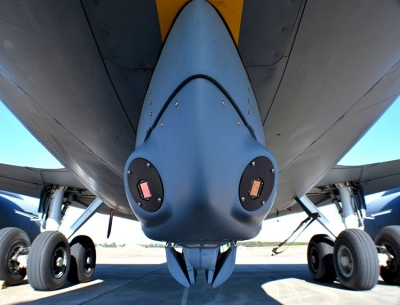 The University of Arizona’s venture capital unit has invested in another photonics-based startup, this time the laser countermeasures firm CMLaser Technologies.

UAVenture Capital (UAVC) says that the deal represents its fifteenth portfolio investment in a little over two years since it became operational.

At least five of those startup firms are working on optics and photonics technologies - and most of those have emerged from the influential Wyant College of Optical Sciences.

Supercontinuum source
CMLaser Technologies is focused on an all-fiber supercontinuum laser system for protecting both military and civilian aircraft from heat-seeking missile attacks. Similar technology is already used on a number of military platforms, but is based on lots of different types of emitters, while systems have tended to be too bulky or expensive for smaller or civilian aircraft to deploy.

“The invested funds from UAVC will be utilized to further University of Arizona patented technologies designed to provide aircraft-based countermeasures capable of detecting and defeating a missile born attack,” stated the venture group.

It added that the countermeasures approach had been developed by faculty member Nasser Peyghambarian. The well-known Wyant professor was also behind the development of a low-cost laser phoropter capable of determining an eyeglass prescription in seconds, and which is being aimed at deployment in low-resource settings.

“Dr. Peyghambarian is a true superstar, and the Wyant College of Optical Sciences has an incredibly strong tradition of innovation in technologies that contribute to our national security and public safety,” said University of Arizona president Robert C. Robbins in a UAVC announcement of the latest funding.

For the countermeasures application, CMLaser Technologies is said to be working on a supercontinuum laser operating in the mid-infrared region of the spectrum.

Existing approaches to laser countermeasures have typically employed shorter-wavelength sources, although the US firm Daylight Solutions developed quantum cascade laser (QCL) countermeasures. In 2017, Daylight was acquired by defense giant Leonardo for around $150 million.

Multi-source replacement
According to UAVC, CMLaser Technologies’ supercontinuum laser is designed to replace current multi-laser configurations that might include optical parametric amplifiers, QCLs, and even more exotic technologies to span multiple wavelengths.

UAVC added that the envisaged laser system would combine reduced size and weight with increased power efficiency. The technology is said to have a significant advantage in terms of reliability because it features no moving parts or need for alignment.

Also said to be suited for scaling to high-power transmission, the system features pulse-shaping capability, and emits light in a single-mode output profile for tight beam propagation over long distances in the atmosphere - all while reducing drag on an aircraft.

“The technology is based on an all-fiber supercontinuum laser that can generate high power (~ 100 W) single-mode beam (M-squared of less than 2) with extremely wide (1-5 µm) simultaneous wavelength coverage,” explains the firm.

Initial interest in the technology would be expected from the US military, which has supported a number of laser countermeasure programs in the past.

“This is a general threat facing many Department of Defense operating assets in a variety of environments requiring threat reduction and sophisticated robust countermeasures,” says CMLaser Technologies.

Representatives of NP Photonics, another Tucson company of which Peyghambarian is CEO, presented details of a similar-sounding supercontinuum source at an SPIE conference back in 2013.

According to that paper’s abstract, the mid-IR source was based on highly purified solid-core tellurite glass fibers that were waveguide-engineered for dispersion-matching with tellurium-doped pulsed fiber laser pumps.

It was said to operate between 2 µm and 5 µm with an efficiency of more than 30 per cent.