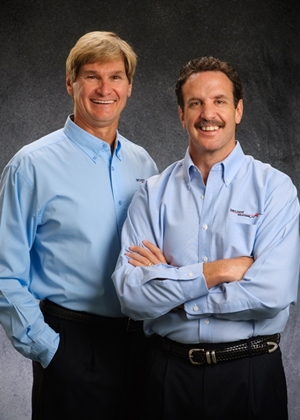 The deal will see the San Diego firm become part of Leonardo’s US subsidiary DRS, which is well known for its infrared imaging expertise. Daylight’s founders Timothy Day and Paul Larson are both staying with the company under the new ownership structure.

Aircraft protection
Daylight has enjoyed particular success in the application of QCLs in advanced infrared countermeasure (IRCM) systems, which are designed to protect aircraft from heat-seeking missiles by confusing the missile’s tracking systems.

The novel wavelengths provided by the QCL devices allow them to offer “out of band” emission in the mid-infrared spectrum, meaning that they can operate more stealthily than conventional IRCMs and avoid detection.

Daylight has previously worked with a number of major defense contractors, including the Leonardo subsidiary Selex Electronics Systems. Founded in 2005, it soon closed a $7.5 million series A venture round, led by San Diego-based Hamilton Tech Capital Partners, and later won significant development funding from the US Naval Research Laboratory.

Then in July 2011, Northrop Grumman acquired an equity stake in Daylight as part of the company’s $15 million series C round of venture funding. In February 2012, Northrop was selected as one of two contractors – along with Boeing – to develop common IRCM systems for the US Army that are lighter and more portable than conventional IRCMs.

In September 2015, the US Army then awarded a consortium including Daylight and Selex ES a $35 million contract to further advance lightweight IRCMs for smaller fixed-wing aircraft and helicopters like the US Army’s Black Hawks.

Meanwhile, Northrop and Selex Galileo, another part of Leonardo, have enjoyed a long-standing relationship in the area of IRCMs, historically delivering hundreds of the systems to UK and US customers, and signing a memorandum of understanding to expand into other territories in 2011.

Significant step
Describing the acquisition as a “significant step” towards Leonardo meeting the targets of its new industrial plan, the defense firm’s CEO Mauro Moretti said: “This acquisition will allow Leonardo DRS to extend the range of advanced solutions to civil and military customers around the world, integrating the Daylight Solutions laser technology in the core business of electro-optical and infrared sensors and systems.”

Leonardo expects to integrate the laser and sensor systems developed by Daylight and DRS for use in a variety of so-called “dual-use” applications, going beyond IRCMs to include medical and industrial applications, including imaging for cancer diagnostics and chemical detection.

Although its main focus has been on IRCMs, Daylight has always worked on non-military applications as well, and at this week’s Pittcon trade show in Chicago, the company launched an updated version of its "Spero" infrared microscope, dubbed “Spero-QT”.

It is designed to enable new analytical applications in pharmaceutical and biomedical research, ranging from non-contact, video-rate tablet and powder imaging to intra-operative label-free digital histopathology.

Bill Lynn, the CEO of Leonardo DRS, commented: “With this acquisition, Leonardo DRS reinforces its commitment to remain at the forefront of infrared technology to not only protect our men and women in uniform but also to perform critical tasks across a range of industries, including medical and industrial applications.”

Protecting with light
Leonardo DRS has agreed to pay $150 million for complete ownership of Daylight, a total including an earn-out provision for Daylight shareholders if financial and operating targets are hit this year.

Leonardo says that its valuation is equivalent to approximately nine times Daylight’s anticipated earnings before interest, taxes, depreciation and amortization (EBITDA) this year. Once the deal is closed, Daylight will be one of eight lines of business within Leonardo DRS.

Timothy Day said in response to the agreement: “The mission of Daylight Solutions, ‘to protect with light,’ will be more fully realized with the combined strength of the people and resources of Leonardo DRS and will enhance our proven ability to transition technology into compelling products for a range of customers and industries.

“We remain committed to continuing the growth of both our defense and instrumentation business for a range of customers and industries.”