Investments in three new companies covers the spectrum from deep-UV to far-infrared sources. 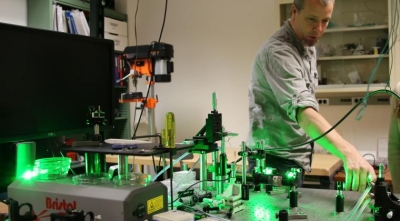 In the laser lab: Chris Hessenius

UAVC, the University of Arizona's in-house venture capital fund, has invested in three new laser companies recently spun out of the Tucson institution.

Between them the three companies to win backing - DeUVe Photonics, CThru Lasers, and Wavelength Unlimited Technologies - are looking to cover almost the entire breadth of the optical spectrum.

DeUVe is working on deep-ultraviolet sources, while CThru is developing tunable lasers operating in the visible and near-infrared range. Wavelength Unlimited is looking further into the infrared and the region known for "spectral fingerprinting".

Innovation ecosystem
UA president Robert Robbins said in a release announcing the three investments, which all draw on technologies developed initially at UA's influential Wyant College of Optical Sciences, that UAVC was helping to create an "ecosystem" of research, innovation, invention, and commercialization.

"The Wyant College of Optical Sciences leads the world in the creation of new technology at the frontiers of optics and photonics," he added. "With the help of UAVC we will bring these technologies to the world."

Each of the startups is based on laser technologies emerging from the laboratories of two Wyant College researchers, Mahmoud Fallahi and Chris Hessenius.

DeUVe Photonics, which is already listed as an exhibitor at the SPIE Photonics West exhibition early next year, has licensed technology that promises to address an unmet need in the 230-400 nm wavelength range.

UAVC anticipates a variety of significant commercial opportunities for the deep-UV lasers, across the defense, mining, and semiconductor manufacturing industries.

Drug testing
According to the UAVC announcement, the innovation licensed by Wavelength Unlimited will have commercial quality control applications in the pharmaceuticals industry, as well as provide an alternative to infrared imaging in security.

Fallahi and Hessenius, whose research interests include high-power semiconductor lasers and tunable sources, as well as fabrication of photonic integrated circuits, were previously involved in the startup firm TPhotonics. It was looking to develop a tunable, pulsed mid-infrared VECSEL laser.

Earlier this year UAVC invested in another laser technology developed at the Wyant College, backing development of the "iCrx" automated phoropter for low-cost generation of eyeglass prescriptions in developing nations.

Another of its existing portfolio companies is EARDG Photonics, which is developing waveguide-based augmented reality (AR) glasses based on volumetric holographic optical elements.