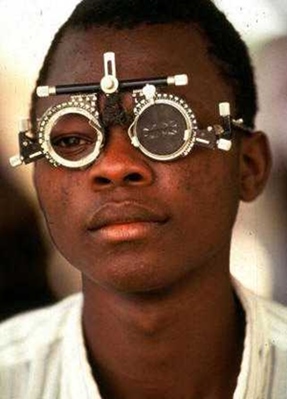 Laser technology that promises to eradicate the subjectivity of eyeglass prescription measurements has won investment from a venture fund set up by the University of Arizona (UA).

Under development at UA’s Wyant College of Optical Sciences - officially re-named after its founding dean and major donor Jim Wyant earlier this year - the “iCrx” technology is said to be capable of generating near-instant prescriptions.

It is expected to prove particularly useful in developing countries, where access to ophthalmic equipment and optometrists is limited.

Better or worse?
As any wearer of glasses knows, determining an accurate prescription can be an interminable process, with tiny changes in vision clarity for each eye often requiring dozens of responses to an optometrist asking whether each lens switch provides “better” or “worse” sight.

In work led by Wyant College faculty members Nasser Peyghambarian and James Schweigerling, co-inventors of the new technology, a team including several students is working to design a prototype version of a compact, automated phoropter.

Phoropter is the common name for the conventional ophthalmic testing device, also known as a refractor, that was invented in 1921.

And although that technology is nearly a century old, the phoropter is still commonly used by eyecare professionals during prescription eye examinations. It contains different lenses used for refraction of the eye during sight testing, to determine each individual's refractive error and therefore his or her eyeglass prescription.

“The new iCrx invention is a hand-held device that can produce an objective and accurate eyeglass prescription in approximately 20 seconds without any subjective input from the viewer,” claims the Arizona team.

Prescriptions in seconds
In October 2017, they published details of the automatic laser phoropter in the journal Nature Scientific Reports. The open-access paper describes a system based around a 785 nm laser from Thorlabs, three tunable-focus fluidic lenses, and thin-film holographic optical elements. That system was said to produce prescriptions within 15 seconds, without the need for supervision.

The three lenses are used to correct for defocus and astigmatism, while refractive error is measured using a Shack-Hartmann wavefront sensor that calculates the Zernike values of an infrared wavefront emerging from the eye.

“Holographic optical elements steer the emerging wavefront into the wavefront sensor, while simultaneously providing an unobstructed view for the subject,” note the researchers in their description of the system.

The work completed so far is sufficiently advanced to have attracted funding from the UAVenture Capital (UAVC) fund, whose unspecified investment will support further development and miniaturization efforts intended to turn the technology into a battery-powered commercial product that can be used in unmanned kiosks, or for rapid screening of large patient populations.

Wyant donations
Early work on the iCrx approach was completed by ophthalmologist and retinal surgeon Gholam Peyman, also a professor of both clinical ophthalmology and basic medical sciences at UA’s College of Medicine in Phoenix.

Peyman is also research director at the institution’s Department of Ophthalmology, but is perhaps best known for his invention of LASIK eye surgery, the laser technique that has been used to correct the vision of millions of people worldwide.

The investment represents the seventh overall by Tucson-based UAVC, which is dedicated to commercialization of UA innovation. One of its existing portfolio companies is EARDG Photonics, which is developing waveguide-based augmented reality (AR) glasses using volumetric holographic optical elements.

EARDG Photonics reports: “The technology achieves high efficiency without color separation and excellent security (no one can see when the viewer sees). Our technology is unlike anything else available in the industry.”

Wyant had already donated $10 million to the UA college in 2013. He has previously won the SPIE Gold Medal, the SPIE Technology Achievement Award, and the OSA Joseph Fraunhofer Award.