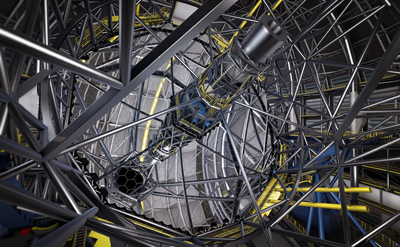 Artists’s Rendering of the primary mirror of the ELT.

The Council of the European Southern Observatory (ESO) has authorised additional spending to cover the cost of the five inner rings of segments for the main mirror (known as M1) of the Extremely Large Telescope (ELT).

Funding will also be made available for a spare set of 133 mirror segments (one sixth of the total on the M1), and an additional mirror segment maintenance unit. The decision was made at the recent meeting of the Council in Garching, Germany, following a recommendation by the ESO’s Finance Committee and enabled by “an improved funding scenario”.

The ELT is a revolutionary ground-based telescope concept which will have a 39-metre main mirror made of 798 hexagonal segments. The developers say it will be the largest optical telescope in the world, or “the world’s biggest eye on the sky”. First light for the ELT is targeted for 2024.

Until this latest funding decision, the inner five rings of segments of the ELT primary mirror were scheduled for Phase 2 of the project, and had not yet been funded. This second phase also included a mirror segment washing, stripping and coating plant to maintain the mirror at its full performance, as well as the spare set of 133 mirror segments. These parts of the telescope’s Phase 2 have now received the green light. ESO commented that “construction of the telescope is proceeding rapidly and nearly 90% of the contracts for phase 1, by value, have already been awarded.“ 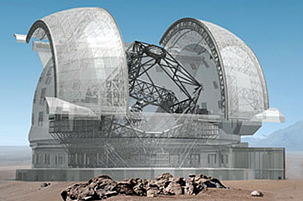 The ELT has a main mirror 39 metres in diameter, covering a field on the sky about a tenth the size of the full Moon. The mirror design itself is revolutionary and is based on a novel five-mirror scheme that results in an exceptional image quality. The primary mirror consists of 798 segments, each 1.4 metres wide, but only 50 mm thick. The optical design calls for an immense secondary mirror four metres in diameter, bigger than the primary mirrors of any of ESO's telescopes at La Silla, Chile.

Adaptive mirrors are incorporated into the optics of the telescope to compensate for the fuzziness in the stellar images introduced by atmospheric turbulence. One of these mirrors is supported by more than 5000 actuators that can distort its shape a thousand times per second.

The telescope will also feature several science instruments. It will be possible to switch from one instrument to another within minutes. The telescope and dome will also be able to change positions on the sky and start a new observation in a very short time. The ability to observe over a wide range of wavelengths from the optical to mid-infrared will allow scientists to exploit the telescope's size to the fullest extent.