Six down, but more than 900 still to go as the first few components are produced at Schott’s facility in Mainz, Germany. 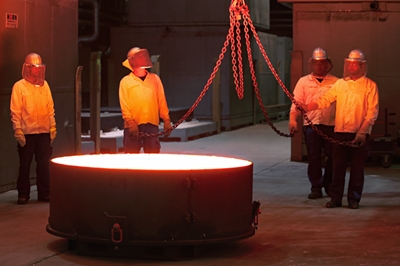 Glass and optical component specialist Schott has cast the first six mirrors for what will eventually become hexagonal components for the giant primary mirror of the Extremely Large Telescope (ELT).

Scheduled for first light in 2024, the ELT will be the biggest optical telescope on Earth when it is completed. Construction efforts are already under way at the 3000-meter summit of Cerro Armazones in Chile, and now Schott has begun the mammoth task of producing more than 900 segments that will eventually make up the primary optic for the five-mirror collector system.

Eye on the sky
The 39 meter dimeter of the primary mirror is too large to be fabricated from a single piece of glass, so instead it will be made up of 798 individual tessellated segments of Schott’s “Zerodur” glass-ceramic.

An additional 133 of those segments, each measuring 1.4 meters across and around 5 cm thick, are being made for spare parts – although Schott says that as many as 949 segments may be required in all.

Marc Cayrel, head of ELT optomechanics at the European Southern Observatory (ESO), which will operate the telescope, was present at the first castings. In a release from ESO, he was quoted as saying: “It was a wonderful feeling to see the first segments being successfully cast. This is a major milestone for the ELT!”

He added: “The main mirror of the ELT will be humanity’s largest eye on the sky, enabling us to reach unprecedented depths of space.”

Schott explains that to make the segments, liquid glass is heated to over 1400° C and poured directly into molds. Those molds are then transferred into a cooling furnace and subjected to a “ceramicization” process lasting several weeks.

After that, each of the circular Zerodur blocks will be cut into five slices, approximately 60-70 mm thick. Further processing at Schott takes place before French firm Safran-Reosc takes over to polish each of the segments to meet the shape and flatness requirements of the ELT.

50-year anniversary
Invented 50 years ago, Zerodur is an extremely low expansion glass ceramic material that has been fundamental to the advances made in large optical telescopes in recent decades.

The inorganic, non-porous lithium aluminium silicon oxide material has provided an ultra-lightweight equivalent to the more conventional and much heavier mirrors used in earlier telescope designs, while minimizing any changes to its geometrical shape with temperature.

The material has been selected for four of the five mirrors that make up the ELT’s optical system. As well as the “M1” primary mirror, it will feature in the 4.2 meter M2, the concave 3.8 meter M3, and the 2.4 meter M4, an adaptive reflector that will correct for atmospheric distortions using feedback from laser guide stars.

Schott has developed special casting molds for the production of the M1 segments. Thomas Westerhoff, the company’s director of strategic marketing, explained: “The glass consumption factor will be as low as possible, so we can work very efficiently.”

Two glass tanks are now working in parallel at Schot’s Mainz site, to meet the current high level of demand that has created around 50 new jobs at the firm. More capacity-expanding investments are planned for the coming year.

Westerhoff added: “Thanks to significant expansion of production capacity at the Mainz site, Schott is very well prepared for the production of Zerodur glass-ceramic, both for the ELT project and for the currently very gratifying high demand from the high-tech industry.”

• Schott will be celebrating the 50-year anniversary of Zerodur on its booth at the forthcoming SPIE Photonics West technology exhibition, which will take place in San Francisco’s Moscone Center at the end of January.