Plan to industrialize long-range 1550 nm sensor technology for automotive use, with series production slated for 2024. 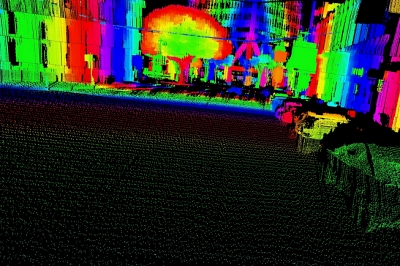 Car parts giant Continental says it is making a minority investment in lidar sensor developer AEye, with plans to industrialize the technology for autonomous driving in both passenger cars and much larger commercial vehicles.

While Continental already has long-standing lidar expertise in-house, and owns a stake in Munich lidar developer Blickfeld via its venture capital unit, the company says that the AEye approach - based around 1550 nm lasers and a MEMS scanner - offers additional benefits, particularly in terms of range.

“The AEye lidar offers maximum leverage for passenger and commercial vehicle applications because it combines a high dynamic spatial resolution with a long-range detection,” added the Michigan-headquartered firm.

Short-range auto lidar incoming
While that long-range technology is not slated for series production until 2024, Continental stated that the partnership with AEye would complement its existing short-range pulsed lidar technology, which is set to go into production before the end of this year for deployment in high-end vehicles.

“This start of production of the high-resolution 3D Flash lidar (HFL) is a key milestone,” claimed the firm. “It is the first high-resolution solid-state lidar sensor to go into series production in the automotive market worldwide.”

Frank Petznick, who heads up Continental’s advanced driver assistance systems (ADAS) business unit, added: “We now have optimum short-range and world-class long-range lidar technologies with their complementary set of benefits under one roof.

“This puts us in a strong position to cover the full vehicle environment with state-of-the-art lidar sensor technology and to facilitate automated driving at SAE (Society of Automotive Engineers) levels 3 or higher in both passenger cars and commercial vehicle applications.”

Vehicles capable of “level 3” or higher automation rely on a combination of camera, radar, and lidar sensors to detect objects and their trajectories around the vehicle.

However, for detecting objects at longer ranges, the pulsed approach is less suitable, with higher power demands and eye safety requirements in the near-infrared spectrum adding complications.

Eye safety restrictions are one of the reasons why lidar sensors based around 1550 nm lasers have found favor at the likes of AEye and its rival Luminar Technologies.

High-profile investors
It is not the first time that AEye has attracted backing from blue-chip investors. More than three years ago the venture capital wings of Intel and Airbus took part in the Dublin, California, company’s series A funding round, before AEye raised another $40 million in its series B effort.

Earlier this month the company appointed Blair LaCorte as its new CEO, with AEye founder Luis Dassan - previously an executive at NASA, Northrop Grumman, and Lockheed Martin - shifting to the CTO role.

“We started AEye with a blank sheet of paper and a goal to create a simple, cost-effective, modular approach to lean sensing,” said Dussan. “By focusing on the data needed to make decisions, we created an intelligent software platform that leverages agile lidar as part of a system instead of a stand-alone passive sensor.

“This approach enables Tier 1 automotive suppliers and technology system integrators with existing customer relationships to precisely and efficiently address any use case.”

Integrated camera option
AEye’s recently launched “4sight” family of lidar sensors, which include the option for a fully integrated HD camera, is aimed at applications in both cars and commercial trucks. The latter sub-sector is one that Continental is looking to target.

“Commercial vehicles with their large mass and longer stopping distance face special challenges to enable safe automated driving,” explained the firm. “Automation for these vehicles will require a maximum sensor range and resolution to ensure sufficient processing time for automated decisions and actions.”

Petznick, who also holds a position on AEye’s advisory board, added: “Continental has vast expertise in all three [automation] sensor technologies and in software development. Access to 1550 nm MEMS lidar technology is another step in this successful sensor strategy.”

LaCorte welcomed the investment from Continental investment, saying, “ADAS solutions require a unique mix of performance, scalability, packaging, and a long-term commitment to reliability and safety.

“Continental is a recognized leader in automotive sensing technology as well as in automotive product industrialization and commercialization. We look forward to working closely with their team to customize our modular and scalable design to deliver Continental’s high-performance long-range lidar systems to the world’s leading vehicle manufacturers.”