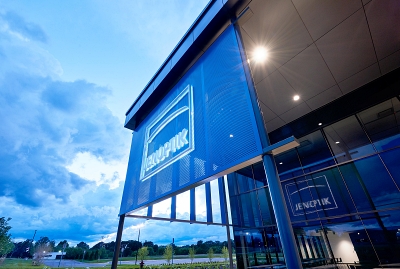 Jenoptik has warned that it expects annual sales in 2020 to be significantly lower than recent estimates, partly due to renewed anticipation of “drastic measures” being imposed to control the Covid-19 pandemic.

The Jena-headquartered firm, one of the world’s largest producers of optics and photonics products, says that its 2020 sales will likely now be somewhere between €730 million and €750 million.

That total, which excludes any potential sales realized by its recently completed acquisition of optics metrology specialist Trioptics, compares with last year’s record-breaking total of €855 million.

Profits hold up
Prior to the emergence of Covid-19, Jenoptik’s executives had been hopeful of setting another sales record this year. As recently as August the company had set its full-year forecast at between €770 million and €790 million, on expectations of a rebound in the second half of the year.

“To ensure a stronger second half-year, we expect to see signs of recovery in the economy and no further corona wave [sic],” said CEO Stefan Traeger at the time.

But as well as dealing with the impact of the pandemic, Jenoptik continues to feel the effects of the weak automotive sector - although it did recently win a significant order from Gestamp to provide laser processing equipment that will be used to make body parts for electric vehicles.

On the positive side, Jenoptik says that solid profitability in the September quarter means that it should hit the upper end of its predicted earnings, despite the impact of Covid-19 on sales both earlier in the year and what now appears likely in the current quarter.

Jenoptik said previously that the measures it had taken to limit the impact of the pandemic, such as short-time working, had in fact had a positive effect on profitability in the second quarter. In the first half of the year, sales were down 12 per cent on the equivalent period in 2019.

The company is set to provide further information when it reports its September quarter sales in full next month.

• Jenoptik has also announced two new senior appointments at its US subsidiaries, with Don Ehinger and Steve Green joining the company recently.

Ehinger is working within the Jenoptik Optical Systems division as senior business development manager for entertainment and consumer electronics. Involved in the optics industry for more than 30 years, he was previously an executive at Sydor Optics, and worked in sales at Navitar prior to that.

Green, who is now the president of Jenoptik Automotive North America, previously worked in several executive roles at Kuka Robotics.