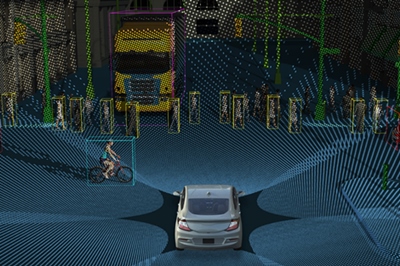 California’s AEye has become the latest start-up company to win substantial venture backing to develop lidar technology for self-driving cars, pulling in $16 million in its series A venture round.

The Pleasanton firm can boast some high-profile investors, with the likes of Airbus Ventures and Intel Capital joining Kleiner Perkins Caufield & Byers, Tyche Partners and others on board.

A US Securities & Exchange Commission (SEC) filing indicates that the company - previously known as "US LADAR" - had already raised $14.7 million by November 2016, and had been seeking a total $18.7 million in equity finance.

Lidar rush
AEye becomes the latest of dozens of venture-backed companies now developing lidar and related technology for what many expect to become a huge market for autonomous transportation systems over the next decade or so.

Others focused on lidar specifically include Quanergy Systems, Velodyne, Luminar Technologies, Innoviz, Oryx Vision, and TetraVue, while the likes of Google affiliate Waymo, Uber, reputedly Apple and others are also closely involved.

Earlier this week Waymo revealed in a blog post that it was now going to focus on its lidar, radar and machine vision technology, and look to retro-fit vehicles made by other auto companies, rather than continue developing its own lidar-enabled self-driving “Firefly” cars. Meanwhile Quanergy's CEO Louay Eldada has recently compared the burgeoning lidar landscape with the optical communications boom of the late 1990s.

AEye’s pitch is that its hardware, software and algorithms for machine vision will come to represent the “eyes and visual cortex” of autonomous vehicles.

“The system intelligently scans a scene, focusing on its information content rather than data,” claims the firm. “By having a visual cortex behind the ‘eyes’ of the vehicle that digests information quickly, AEye greatly improves reliability.”

In terms of the photonics hardware at the heart of the approach, AEye is building its systems around laser diodes operating at 1550 nm – the same wavelength adopted by Luminar, while most other developers are using shorter wavelengths that can be provided with cheaper emitters.

The company appears to be at a relatively advanced stage in its development of that technology, saying that it will use the $16 million funding to commercialize its robotic vision system, and is already in “early testing” with large transportation and heavy industry OEMs, with phased commercial roll-outs planned throughout 2017 and 2018.

Bottleneck
AEye’s CEO Luis Dussan said in a release announcing the series A investment: “The biggest bottleneck to the roll-out of robotic vision solutions has been the industry’s inability to deliver a world-class perception layer.

“Quick, accurate, intelligent interpretation of the environment that leverages and extends the human experience is the Holy Grail [sic], and that’s exactly what AEye intends to deliver.”

Dussan is a graduate of the University of Central Florida’s College of Optics and Photonics (CREOL), one of the leading centers for photonics technology development and training in the US.

According to his LinkedIn profile, the CEO previously worked at NASA’s Jet Propulsion Laboratory, as well as defense contractors Lockheed Martin and Northrop Grumman, and has expertise in techniques including adaptive optics, ultrafast lasers, beam steering, remote sensing and algorithm development.

Immediately before starting up AEye in 2013, Dussan was employed as “LADAR Chief Technologist” within Northrop Grumman’s electro-optic sensors division.

Also among AEye’s senor team is VP of engineering Barry Behnken, who has a background as a program manager and director at US Air Force Space Command and Raytheon’s space and airborne systems division.

Meanwhile its director of MEMS technology Joe Drake, who was previously at Google and Kaiam Corporation, spent nearly a decade as laser giant Coherent’s director of engineering and operations.