First public outing for UK-developed self-driving vehicles as ‘Endeavour’ cars take to the streets of Oxford. 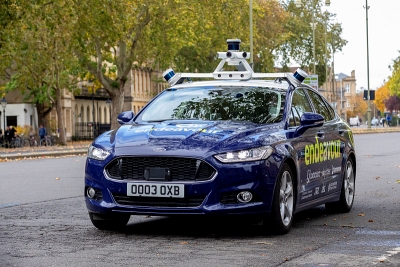 According to project leaders at Oxbotica, the first such trials of its fleet - six Ford Mondeo cars capable of “Level 4” autonomy - will run until Autumn next year. Among a variety of sensors, the cars are fitted with lidar units provided by China’s Hesai Technology.

“The trials will demonstrate autonomous driving in a variety of urban and city environments and will develop engagement models with local authorities and communities to help them prepare for the future launch of autonomous vehicle services,” announced Oxbotica.

Over the next 12 months the vehicles will complete nine-mile round trips between two railway stations in the city, with the trials running at all times of the day and night so that a wide range of traffic scenarios and weather conditions are tested.

Oxbotica told optics.org that the number and type of sensors used on the fleet of autonomous vehicles was dependent on a number of factors.

“One of the great things about our autonomy software is that it is both platform and sensor agnostic, meaning that it will work with any vehicle or brand of sensor,” explained the firm.

“We use three types of sensors on our vehicles - cameras, lidars and radars - and we can use these independently from each other or together in a number of different combinations, depending on the vehicle and environment that we are operating in.

“For example the sensor set-up on a mining truck would be vastly different from that on a shuttle in a busy city.”

However, the specific sensor arrangement on the Ford Mondeos used in Project Endeavour features three rotating lidar sensors produced by Hesai, positioned as shown in the accompanying image to provide a full field of view around the vehicle.

The 128-beam unit is said to detect low-reflectivity objects at a range of 200 meters - a key figure required for road safety. Recent months have also seen the company agree a global cross-licensing deal with US-based rival Velodyne, after the two companies had initially threatened each other with patent litigation.

Analysts at the market research firm Yole Développement have ranked Hesai inside the top 20 lidar companies globally, with revenues of $13 million in 2019. Velodyne, which recently listed on the Nasdaq, was ranked in fifth place by Yole, with annual sales of $100 million.

Level 4 capability
Camilla Fowler, TRL’s head of automation, said of the latest developments in Oxford: “Trials of Level 4 vehicles are an important milestone, keeping the UK at the head of the field in bringing the benefits of this technology into mainstream use.

“These exciting trials, and what we learn about assuring safety and encouraging interoperability will open up new opportunities for many more research demonstrations across the UK, which are the forerunners to the full-scale public trials so eagerly awaited.”

Project Endeavour represents a follow-up to the earlier “DRIVEN” consortium’s efforts, which demonstrated the capabilities of a fleet of self-driving vehicles in both Oxfordshire and London.

Graeme Smith, senior VP at Oxbotica and director of the Endeavour consortium, added: “The first live on-road public trials mark a key landmark for Project Endeavour as we work with local authorities and members of the public in London, Oxford and other major UK cities to shape the future of mobility.