VCSELs to feature in production vehicle lidar from 2022 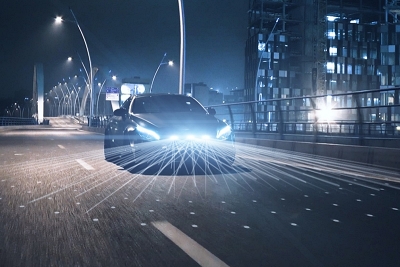 Ibeo says it has commissioned key partner ZF Friedrichschafen - which in 2016 acquired a major stake in Ibeo - to produce the sensors and control unit for the “Level 3” system, which will provide partial autonomy.

GWM has contracted one of its own subsidiaries to develop the system, which will be based around vertical cavity surface-emitting lasers (VCSELs) produced by Austria’s AMS.

Longer highway autonomy
Ibeo points out that, after signing a letter of intent in 2019, it has already been in pre-development with GWM for a year. Officially, the project started with the signing of an additional contract by the two parties last month.

“In the future, Ibeo will supply a system that enables a Level 3 highway pilot to drive semi-autonomously,” announced the Hamburg-headquartered firm. “This enables fully automated driving over longer distances on the highway.”

The system comprises the new ibeoNEXT solid-state lidar, as well as a control unit and perception software for object recognition.

“GWM will be using Ibeo technology for future series production models of its premium WEY SUV,” said Ibeo, with series production slated for 2022. China’s LiangDao Intelligence is responsible for the testing and validation of the full set of lidar systems, it added.

Ibeo’s CEO Ulrich Lages said in a company announcement that the contract with GWM was “one of the largest ever signed” for lidar provision in cars.

“For Ibeo, the cooperation is an important milestone with which we are further extending our global technological leadership in the field of lidar,” Lages claimed. “We are the first supplier in China to use lidar sensors to enable Level 3 automated driving in a production vehicle there."

VCSEL arrays
In May last year, AMS joined the automotive lidar development team that had already been set up by Ibeo and ZF, with a view to incorporating VCSELs in production systems, rather than the typically much more powerful edge-emitting laser diodes.

However, the surface emitters are much cheaper to produce, and a typical VCSEL array provided by AMS would resemble a larger version of the face recognition security systems now familiar in various high-end smart phones. It could comprise as many as 50,000 individual emitters.

The sheer number of emitters should also help to boost the overall reliability of the approach, because any single device failure would have only a limited impact on system performance.

“The specially designed VCSEL manufacturing technology allows for great flexibility in layout design regarding number of pixels, their size and pitch, and specific addressability patterns,” adds the firm.

Other claimed advantages of VCSELs include a narrower emission bandwidth over temperature, leading to more effective filtering at the receiver and a better signal-to-noise ratio.

The sensor maker - which after a protracted takeover process recently acquired the lighting and photonics giant Osram - also has expertise in related capabilities, including the current driver and optics needed for the arrays.