Developer KIT says such sensors could play a key role in telecommunications, as they enable data transmission. 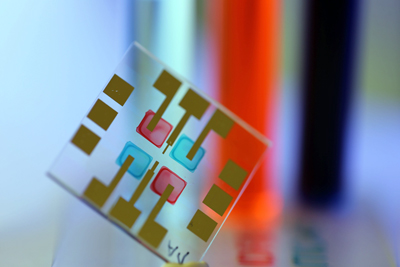 Cameras, light barriers, and movement sensors have one thing in common: they work with light sensors that are already found in many applications. In future, these sensors could play an important role in telecommunications, as they enable data transmission via light.

At the InnovationLab in Heidelberg, Germany, scientists working at Karlsruhe Institute of Technology (KIT) succeeded in making decisive progress: Printable light sensors that can see colors. The work is reported in Advanced Materials.

New technologies will increase the demand for optical sensors for a variety of applications, including visible light communication (VLC). VLC uses interior lighting of buildings for optical communication. In terms of security, speed, and accessibility, this technology has a number of advantages over conventional transmission processes, such as WLAN or Bluetooth.

“Our research is based on the idea of combining the advantages of a special type of materials, namely, organic semiconductors, and their production by printing processes,” explained Dr. Gerardo Hernandez-Sosa of KIT’s Light Technology Institute, one of the authors of the publication.

Semiconductors are the basis of computers, smartphones, solar cells, and many other technologies. Some of the semiconducting materials react to light by changing their conductivity. Light intensity can be measured as electrical current. Using a printer, some materials can be applied to a carrier material like printing ink.

These materials react to varying wavelengths, which means that they can distinguish colors. The team of Hernandez-Sosa has now succeeded in finding a composition of materials suited for use as wavelength-sensitive light detector as well as for printing onto flexible carriers.

Printing can be performed on very small to very large areas. The layout can be designed easily with the help of a computer. “High numbers of these photodetectors of any design can be produced on flexible, light materials. Hence, they are particularly suited for mobile devices,” first author Noah Strobel points out.

Printing of semiconductor components is a relatively young process, but has a considerable potential for future applications. Industry is already making large investments in the production of printed OLED displays for TVs and smartphones.

Printed flexible solar cells or pressure sensors are commercially available already. Production of printed light detectors has also reached the industrial scale. It is therefore highly probable that these elements will be used in many applications in future, even more so, as the demand for sensors is increasing in the internet of things, in smart cities, and in Industry 4.0.