Better understanding of polariton emission should assist their use in real-world networks. 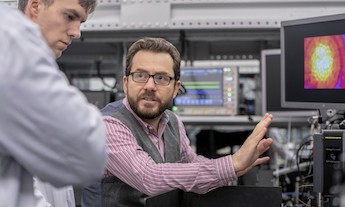 A breakthrough in the exotic world of light-matter interactions could lead to improvements in ultra-fast and low-energy all-optical data processing, according to a project led by the Skolkovo Institute of Science and Technology (Skoltech) in Moscow.

The findings involve the behavior of polaritons, so-called quasi-particles created when a photon interacts with the electric or magnetic dipole of a medium, and which are known to influence to speed with which light can propagate through that medium. The research was published in Communications Physics.

The Skoltech Center for Photonics and Quantum Materials has an ongoing research program into what happens when polaritons form Bose-Einstein condensates (BECs), a state of matter in which large numbers of polaritons then share the same properties, allowing their normally microscopic quantum phenomena to become apparent macroscopically - although only at extremely low temperatures.

According to the Skoltech group, a range of applications could in theory utilize the relatively massive wavefunctions of polariton BECs. When embedded in optical cavities they can be optically pumped to emit coherent light like a laser, while the inherent light-matter entanglement can produce ultra-fast propagation of light in a hybrid form of matter called "liquid light."

"The strong light-matter coupling can slow down the photodegradation of molecules and extend their lifetime, change the course of photochemical reactions, and provide photons with an ability to interact with each other," said Pavlos Lagoudakis of Skoltech's Hybrid Photonics Laboratory. "This latter feature allows us to develop efficient optical signal processing devices."

However, there are still aspects of polariton BECs that are not fully understood. One challenge has been the abrupt shift in the emission properties of polariton condensates which occurs at increasing polariton density, and which always drives the frequency of light toward higher values. The exact processes behind this phenomenon have remained elusive.

The Skoltech project investigated the mechanisms behind this blueshift in the emission energy, by studying the contribution of various nonlinear optical phenomena to the overall behavior of the material.

Real-world relevance for these findings could come from the use of polariton BECs in datacomms systems, where the strong coupling effects found in the exotic material could offer opportunities for all-optical digital processing technologies. These could potentially demonstrate faster speeds and better efficiencies than conventional networks, where the processing of optical signals can involve the conversion of light into electrical signals and back again.

The Skoltech scientists believe they are the first to discover the impact of the intermolecular energy transfer between neighboring molecules on the nonlinear properties of organic polaritons, and that they now understand more fully the underlying mechanisms affecting polariton behavior in organic materials.

This knowledge may help to define the experimental parameters required to couple several polariton condensates into a single circuit, in order to build a polariton signal processor of real-world use. In addition the research may help to explain the phenomenon of polaritons demonstrating superfluid properties, an ability to move without friction in organic matter.

"These findings are of high interest not only to our research area but can be helpful in other fields as well," commented Anton Zasedatelev of Skoltech. "I believe the nonlinearity mechanisms discovered are quite general among the organic materials, therefore it might prove to be universal for strongly-coupled organic systems."