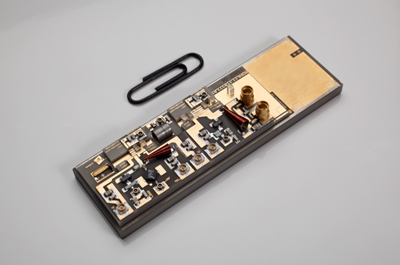 A laser-cooled cloud of ultra-cold rubidium atoms is now flying in space for the first time, after the successful launch of the matter-wave interferometry under microgravity (MAIUS) mission by a team from Germany.

Built by a national consortium including the Ferdinand-Braun-Institut (FBH), Leibniz-Institut fuer Hoechstfrequenztechnik and Humboldt-Universitaet zu Berlin (HU), the first quantum optical sensor in space is set to test some of the fundamental predictions of relativistic physics.

The Bose-Einstein Condensate (BEC), which launched January 23 from the Estrange Space Center in Kiruna, northern Sweden, will used atom interferometry to determine whether - as is predicted - atoms of different weights really do fall at equal acceleration in the gravitational field of the Earth.

Freezer-sized BEC equipment
Discovered only 20 years ago and the subject of a Nobel prize in physics for Eric Cornell, Wolfgang Ketterle and Carl Wieman in 2001, BECs initially required a laboratory-sized bank of equipment.

But thanks to advances in lasers and other key technologies, the MAIUS team has been able to fit all the necessary tools into a BEC module only half a meter long. The five-module payload, of which only two modules are experimental, weighs just 312 kg.

“Today’s quantum optical sensor is as small as a freezer and remains fully operational even after experiencing huge mechanical and thermal stress caused by the rocket launch,” announced FBH shortly after the launch phase was completed.

The team added that the groundbreaking mission would act as a “pathfinder” for future applications of quantum sensors in space, with the aim of helping scientists working on one of the biggest challenges of modern physics – unifying the theories of gravity and quantum mechanics.

Among the photonics advances on board MAIUS are hybrid micro-integrated semiconductor laser modules suitable for space. “These laser modules, together with optical and spectroscopic units provided by [other] partners, have been integrated and qualified by HU to provide the laser subsystem of the scientific payload,” said the consortium.

“The results of this mission co-ordinated by Leibniz Universitaet Hannover do not only prove that quantum optical experiments with ultra-cold atoms are possible in space, but also give FBH and HU the opportunity to test their miniaturized laser system technology under real operating conditions.”

Although this is the first time that a BEC has flown into the microgravity conditions of space, the laser equipment was previously tested on board two sounding rockets for related missions.

See the spectacular explosion when #MAIUS1 leaves the launcher in slow motion! pic.twitter.com/PbaOGIwtdi

Laser system development
At the heart of the BEC equipment is a compact and robust diode laser system for laser cooling and atom interferometry with ultra-cold rubidium atoms, developed by HU’s optical metrology research group and described in detail by the consortium in an open-access arXiv paper here.

It comprises four diode laser modules developed by FBH as hybrid-integrated master-oscillator power-amplifiers (MOPAs). The master laser is a monolithic distributed feedback (DFB) laser that is frequency-stabilized to the frequency of an optical transition in rubidium, and generates a low-power but spectrally pure and highly stable (~1 MHz linewidth) output at 780 nm.

The three other laser modules feature a tapered amplifier chip with a ridge waveguide input section, says FBH. Tapered amplifier chips then boost the optical output power of the DFB laser beyond 1 W without any loss of spectral stability, while two additional redundancy modules are integrated.

Free-space acousto-optical modulators and optical components then generate the laser pulses required for the BEC experiment, before they are transferred to the experimental chamber using optical fibers.

The MAIUS mission even includes a laser technology demonstrator designed for future missions. In it, two extended-cavity diode laser (ECDL) modules developed by FBH yield an output with better spectral purity that will be needed for higher-precision atom interferometry experiments.

Potential applications for future space missions include comparing frequency standards, to test the so-called “Lorentz Boost Invariance” principle – and therefore the independency of the speed of light. Any violation of Einstein’s predictions would require new theories of physics to explain.