Dutch research group says the key to omnidirectional emission is the introduction of irregularities in its lasing materials. 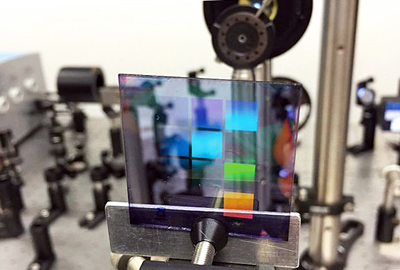 Experimental sample of the new nanolaser.

Researchers at Eindhoven University of Technology (Tu/e)and the Dutch Institute for Fundamental Energy Research (DIFFER), both in the Netherlands, have developed a new type of low-energy, nanoscale laser that transmits in all directions. The key to this omnidirectional light emission is the introduction of irregularities into the laser materials – a structure that laser makers usually work hard to avoid.

The team of Mohammad Ramezani, Quynh Le-Van, Alexei Halpin, and Jaime Gómez Rivas say that they foresee a “a vast range of potential applications”. The results are published in Physical Review Letters.

The scientists from TU/e and DIFFER have investigated the role of imperfections and disorder in nanolasers. By introducing a slight degree of disorder, they have observed a dramatic change: the laser no longer emits in one specific direction, but in all directions.

Development of nanoscale lasers is today a very active field of research. In a normal laser, each photon is cloned many times in a medium that is located inside a cavity; typically a pair of mirrors between which the photon moves back and forth producing other photons with the same characteristics.

A different kind of laser is the so-called polariton laser. This works on the principle not of cloning photons but making non-identical photons identical in much the same way as water vapor molecules, moving in all directions with different velocities, may be condensed into a single drop. Condensation of photons gives rise to the intense and directional emission characteristic of a laser. An important advantage of polariton lasers is that they have a much lower lasing threshold, which makes them excellent candidates for many applications, say the Netherlands-based researchers.

However, a major problem of polariton lasers has been that they need to operate at very low temperatures (as with vapor condensation that occurs only when the temperature is lowered). However, by the use of organic materials, it is possible to achieve polariton laser emission even at ambient temperature.

The Eindhoven researchers demonstrated last year that they can realize nanoscale polariton lasers that function at ambient temperature, using metallic nanoparticles instead of mirrors as in normal lasers. They have now discovered a new kind of polariton laser that consists of a regular pattern of silver nanostripes covered with colored PMMA-polymer whose dye comprises organic emitting molecules. However, the silver stripes deliberately have some degree of imperfection and disorder.

The researchers believe their new laser design may eventually be applied in diverse application areas. Lead researcher professor Jaime Gomez Rivas, commented, “Compared to a LED, the omnidirectional laser light is much brighter and better defined. That’s why it is a good candidate for microscopy lighting, which currently uses LEDs.

”LIDAR is another potential application. Current LIDAR use one or more lasers and a set of fast moving mirrors in order to cover large areas to image distant objects. An omnidirectional laser does not require the moving mirrors, thereby significantly reducing the complexity.” Furthermore, general illumination is an option. Rivas added, “But this research is still very fundamental. We hope that our results will stimulate other researchers to improve them by further reducing the lasing threshold or increasing the range of emitted colors.”