First non-stop flight over the Atlantic Ocean powered by photovoltaic cells is completed in just over 71 hours.

The Solar Impulse 2 aircraft has completed the first crossing of the Atlantic Ocean by a plane powered entirely by photovoltaic cells.

Pilot Bertrand Piccard completed the flight in 71 hours and 8 minutes. It is part of a round-the-world trip that has previously included a crossing of the Pacific Ocean with a stop-off in Hawaii after an even longer flight of nearly 118 hours starting in Japan.

Shortly after landing in Seville, Spain, Piccard and André Borschberg – who have taken turns piloting the one-seater aircraft on 15 legs so far – said: “We really hope that this flight symbolises the flight from the old world to the new world…the world of innovation and of pioneers.”

Spectacular #selfie moment over the #AtlanticOcean. Share it if you think the #futureisclean pic.twitter.com/JwOqeFa7Qe

The circumnavigation began more than a year ago, with a 13-hour flight from Abu Dhabi to Muscat. However, during the record-breaking Pacific leg the plane’s lithium polymer batteries overheated, delaying the project while replacements were installed. At 633 kg, those batteries make up more than a quarter of the aircraft’s weight.

After taking off in New York, the latest transatlantic leg covered a distance of 6765 km, reached a maximum altitude of just over 8500 m, and used 1388 kWh of solar energy.

Solar Impulse 2 features more than 17,000 high-efficiency (23 per cent) monocrystalline PV cells made by California-headquartered SunPower - which is majority-owned by the French oil and gas giant Total - to generate its power. Covering virtually the entire aircraft, over an area of nearly 270 m2, they can convert solar energy into up to 340 kWh of electrical energy each day. 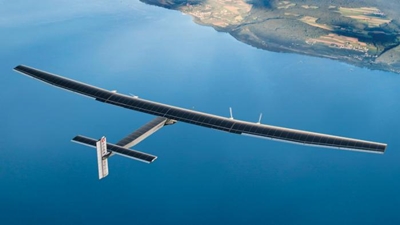 SunPower says that the “Maxeon” cells used, which had originally been perfected for NASA’s Pathfinder Plus and Helios solar plane development missions, offer a winning combination of efficiency, flexibility, reliability and low weight.

Also involved in the Solar Impulse 2 project is Christophe Bailiff’s PV Laboratory at the École Polytechnique Fédérale de Lausanne (EPFL) in Switzerland, where the cells were put through intensive tests prior to the round-the-world trip, which is promoting the development of clean technologies.