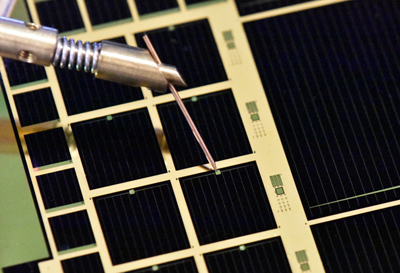 The device performance has been certified by the US' National Renewable Energy Laboratory and tested under the industry standard air mass 1.5 global (AM1.5G) simulated 1-Sun solar spectrum.

Established in 2000, MicroLink Devices is based in Niles, IL, USA, and specializes in the design, epitaxial growth and fabrication of devices such as solar cells, lasers, photodetectors and heterojunction bipolar transistors.

In recent years, the company has ramped up the production of its ELO-based solar cells and sheets for use in mobile power, unmanned aerial vehicle, and traditional satellite applications.

The 37.75% efficiency is the highest reported for a triple junction ELO solar cell produced on a 6-inch GaAs substrate production platform. The specific power of this ELO solar cell design exceeds 3000 W/kg under 1-sun AM0 spectrum, which is the world record in comparison to any other solar cell technology.

These solar cells are currently bring used to provide energy to the Zephyr HALE (High Altitude Long Endurance) platform produced by Airbus Defence and Space in Farnborough, UK. MicroLink has an exclusive licensing agreement with NREL for the inverted metamorphic multi-junction (IMM) technology used to manufacture the high-efficiency solar device.

MicroLink’s proprietary ELO process makes it possible to peel off thin layers of active solar cell material that were deposited on a GaAs semiconductor substrate. The relatively expensive GaAs substrate can also be re¬used multiple times to lower manufacturing costs. 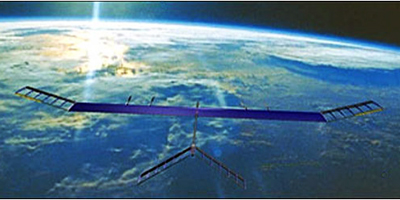 MicroLink’s ELO technology development has been supported over the past decade by numerous US agencies including NASA, DARPA, the Air Force Research Laboratory, the Office of Naval Research, NAVAIR, Army Research Office, Army REF, CERDEC, ARPA-E, and the Department of Energy.

Dr. Noren Pan, founder and president of MicroLink Devices, commented, “We are continuing to push the limits of what can be achieved with the ELO technology. Our triple-junction IMM ELO solar cells combine the highest efficiency with the lowest mass density of any solar cell technology available today. This represents a compelling solution for demanding unmanned aerial vehicle and satellite applications.”

More details about the record ELO cell performance is being presented at this week’s Space Power Workshop in Los Angeles (April 23-27) and then at the IEEE Photovoltaics Specialists Conference in Waikoloa, HI (June 10-15) .