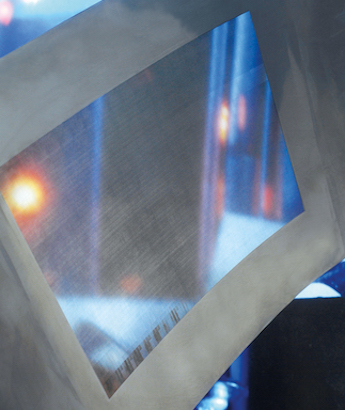 Cleaning up: removal of microparticles

A project funded by the German Federal Ministry of Education and Research (BMBF) is employing laser drilling technology developed by Fraunhofer ILT as part of its efforts to filter microplastics from waste water.

The project is currently nominated for a Green Award as part of 2020's Greentech Festival, an initiative launched by a group of engineers along with former Formula 1 World Champion Nico Rosberg.

The project's goal is to tackle the recognized problem of microplastics being carried by waste water and accumulating in the environment. A study at the Fraunhofer Institute for Environmental, Safety and Energy Technology (UMSICHT) calculated that 333,000 tonnes of microplastics are released into the environment each year in Germany alone, but researchers are still working out what effects this might be having on people and the environment.

Microplastics are not easy to filter out of waste water, partly because existing treatment plants were not designed to deal with particles of such small size. SimConDrill was launched in January 2019 to develop a durable filter module suitable for retrofitting into standard cyclone filters, allowing them to remove the microparticles from liquid via centrifugal force.

"This filter is equipped with special metal foils which are drilled extremely precisely with an innovative laser technology," commented Fraunhofer ILT at the project's launch event. "The requirements for the filters are high, requiring the largest possible part of the filter area to be occupied by boreholes."

Laser drilling of conical pores is the key operation, according to the project. Conventional cyclone filters employ metal films with pores around 100 microns in size, but collection of microplastics requires that parameter to be reduced by an order of magnitude.

Scaling up production of the laser-drilled sheets will now be a key step, and the consortium is investigating the use of multi-beam processing systems with 100 parallel beams. This brings its own challenges, however, since it risks melting or distorting the filter foil. Process simulations and in-line control systems developed by Fraunhofer ILT and OptiY aim to deal with this hurdle.

The next step in the project, which is scheduled to run until June 2021, will be to scale up the process for industrial use. Researchers have already succeeded in integrating some of the drilled test foils into working cyclone filters, and have begun functional and flow testing, according to SimConDrill. The group intends to optimize its drilling operation and build prototype filters during 2020, before installation of a test unit in a sewage plant in 2021.

"Although the filter module is being developed and tested for wastewater treatment plants, it could also conceivably be adapted for mobile use in sewer cleaning vehicles or for private households," commented the team. "The microplastics filtered out of the water can be collected from the cyclone filter and then recycled, and the filter itself is designed to be durable, rather than disposable."