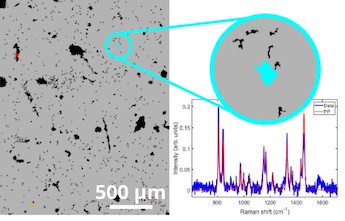 The presence of microplastics in the environment is a serious ecological concern, not least because the tiny particles can be very difficult to spot and characterize.

A project at the Danish Technological Institute (DTI) has now demonstrated a promising technique for doing just that, using a Raman spectroscopy platform from UK developer Renishaw to help determine the extent of microplastic pollution entering Danish wastewater and rainwater systems.

"At scales below 100 microns it is essentially impossible to determine whether a particle is made of plastic, rubber, stone, glass or organic matter, based on its visual characteristics alone," commented Morten Bormann Nielsen of DTI.

"Therefore, one must use a characterization technique that yields chemical information about the investigated sample. Doing otherwise will lead to either gross over- or underestimation of the number and types of microplastic present in a sample."

The DTI previously developed and implemented a method for quantifying microplastics in wastewater and used it to analyze the amount of the materials present in two Danish wastewater treatment plants.

It has now further developed the measurement protocol to differentiate between fine particles of tyre, asphalt and organic matter, moving closer to an ultimate goal of fully characterizing all particles in a sample as microplastics, microrubber or of natural origin, using the same method and without needing intervening sample preparation. This has not been achieved before, according to DTI.

Spectroscopic analysis of microplastic pollutants has been the focus of research efforts for some time, with techniques able to identify the material's chemical structure rather than just its morphology being particularly attractive. Fourier‐transform infrared methods, spontaneous Raman spectroscopy, and versions of mass-spectrometry have all been employed, but tend to require unacceptably long analysis periods when mapping particles with sizes in the micron range.

Development of stimulated Raman scattering (SRS), in which a Raman signal is generated when the energy difference between two laser beams matches a vibrational state of the molecules being examined, has helped to reduce signal acquisition times and make the technique attractive for environmental monitoring in several scenarios.

The DTI technique is being used initially to quantify the amount of microplastics and microrubber in rainwater at several locations in Denmark. An initial published analysis of over 4,000 particles, all larger than 10 microns, revealed that only 33 matched any of the most commonly used plastic types, underscoring the need for thorough sampling.

"Despite sample preparation steps designed to remove sand and organic matter, the vast majority of all microscopic particles in wastewater and rainwater are still not plastic," confirmed Nielsen. "Because of this, it is essential to measure many thousands of individual particles in the sample to get statistically valid results. Using the features of the inVia Qontor system it is possible to run such measurements overnight, saving us a lot of valuable time."