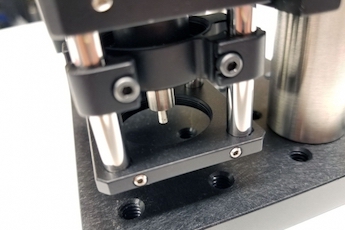 Frequent testing of blood sugar levels is a fact of life for patients with diabetes, but the procedure's inherent discomfort and inconvenience can become a deterrent to carrying it out.

Spectroscopic techniques potentially allow the testing of blood sugar levels to be carried out non-invasively, although hurdles to the development of user-friendly and accurate platforms have proven persistent.

A project at MIT has now shown that direct observation of the glucose fingerprint can be achieved using in vivo Raman spectroscopy, the latest step in ongoing research into monitoring of diabetes by MIT’s Laser Biomedical Research Center. The work was published in Science Advances.

"Today, diabetes is a global epidemic," said Peter So of MIT. "If there were a good method for continuous glucose monitoring, one could potentially think about developing better management of the disease."

Difficulties in using Raman for this have included the weakness of glucose-specific Raman peaks from the cells underneath the epidermis layer of the skin, thanks to the skin's natural auto-fluorescence and potentially significant shot noise from proteins, lipids, and collagen.

This has compelled researchers to investigate ways of calculating glucose levels indirectly, and MIT previously reported a technique involving comparison between Raman data from skin samples and glucose concentrations in blood samples taken at the same time. But this approach requires frequent calibration and is easily affected by environmental conditions.

The new breakthrough, however, delivers a direct measurement of the glucose signal in vivo from a probe in the subject's skin, thanks to changes in the experimental technique.

Clinical adoption and domestic use

One key design change involved an off-axis non-contact spectroscopy architecture, in which the illuminating laser was orientated at an oblique angle of around 60 degrees and the subsequent Raman signal was collected vertically. This increases the effective sampling volume of the targeted layer while reducing the collection of background signals, according to the team.

"Off-axis illumination and vertical collection spatially filter out the specular Rayleigh reflection from the skin surface, and reduce the burden of the Rayleigh rejection filter at the probe tip," noted the project in its published paper. "In addition, the non-contact measurement is free from potential distortions of tissue, which is important for stable long-term measurement."

In trials, a probe from the device was attached to the ears of three female Yorkshire pigs, and the project found that after 10 to 15 minutes of calibration time the system then delivered accurate glucose readings for up to one hour. Comparison with glucose measurements from blood samples confirmed the validity of the results.

These results marked the first direct measurement of glucose signals from tissues in a transdermal manner without advanced computation and signal extraction being involved, according to Peter So.

Next steps on the road towards human trials on diabetic patients will include shrinking the overall platform, which is currently described as being the size of a desktop printer. A more portable system could pave the way for ultimate clinical adoption, or even for domestic use.

"You might have a device at home or a device in your office that you could put your finger on once in a while, or you might have a probe that you hold to your skin," So said. "That’s what we’re thinking about in the shorter term."