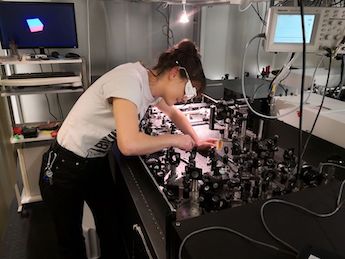 A project including TU Wien, Greece's FORTH research institute and the University of Crete has generated terahertz pulses from mid-IR laser sources at higher efficiency levels than previously possible, potentially offering a valuable tool for next-generation nonlinear optics systems.

Creation of powerful THz sources is also a necessary step for wider utilization of the technology in industrial and commercial spheres. The breakthrough was reported in Nature Communications.

The project employs one of the current standard techniques for generating THz pulses, termed two-color filamentation. In this approach, both the fundamental and second-harmonic pulses from an ultrashort laser are focused together in a medium, typically a vapour, to create a gaseous plasma. This causes the emission of a THz pulse in a forward direction.

Improving the efficiency of this method has been a focus of research for some time, but the complexity of the physics involved has limited the progress made.

TU Wien and its partners built on an earlier analysis of THz generation, which had predicted that two-color filamentation could theoretically be a source of single cycle THz pulses with multi-millijoule energies and extremely high conversion efficiencies, potentially much higher than current methods.

To prove the theory experimentally, the project employed a powerful mid-IR source capable of producing sub-100 femtosecond laser pulses at 3.9-microns wavelength, with a maximum pulse energy of 30 mJ at a 20 Hz repetition rate.

Ingenious experimental design then tackled the factors which the theory predicted would increase the efficiency, such as allowing longer and wider plasma channels, and adjusting the temporal parameter called the walk-off between the two harmonics. The results showed that the THz generation process had indeed received a significant boost in efficiency.

"In our experiments we obtained single cycle THz pulses with energies up to 0.185 mJ, THz conversion efficiencies up to 2.36 percent and THz field amplitudes exceeding 100 MV per centimeter," commented the team in its published paper.

"Such a level of THz yield makes mid-infrared two-color filaments the most efficient source of THz radiation among existing plasma-based THz sources. The conversion efficiency demonstrated is more than two orders of magnitude higher compared to typical values obtained with two-color pulses from Ti:sapphire lasers."

The numerical simulations indicate that further optimizations of the experimental setup could allow even higher THz energies and conversion efficiencies to be achieved, possibly getting close to the theoretical maximum values.

"Another important advantage of the new method is that a very broad spectrum of terahertz radiation is generated," commented Claudia Gollner of TU Wien. "Very different wavelengths throughout the terahertz range are emitted simultaneously. This produces extremely intense short radiation pulses. The larger the spectrum of different terahertz wavelengths, the shorter and more intense pulses can be generated."

The findings could mean that a THz source for extremely high intensity radiation is now available from a relatively conventional and affordable laser source for the first time, according to the project team. Applications could then more readily exploit the ability of THz radiation to penetrate many materials without the ionizing effects associated with X-rays.

"Initial experiments with zinc-telluride crystals already show that terahertz radiation is excellently suited to answer important questions from material science in a completely new way," commented Andrius Baltuska of Vienna University of Technology. "We are convinced that this method has a great future."