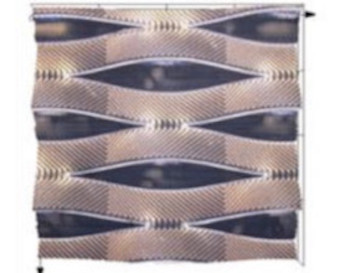 Researchers at the University of Michigan have detected microscopic twists in the internal structure of plant and animal tissue without using potentially harmful X-rays.

The approach involves rotating terahertz radiation in real time, and is said to be the first successful implementation of this approach, potentially opening up new applications in medical imaging, encrypted communications and cosmology. The work was reported in Nature Materials.

"Our bodies have a lot of twisted structures that are close enough to the surface for terahertz photons to penetrate: vessels, ligaments, muscle fibers, molecules and even some helical bacteria," said Nicholas Kotov of the University of Michigan.

Terahertz radiation can penetrate about six millimeters into the body, but unlike X-rays is non-ionizing, removing the risk of it creating damaging electrical charges in the body.

The project's breakthrough involves terahertz circular dichroism (TCD) spectroscopy, the differential absorption of left- and right-handed circular polarized light, which according to the project was impractical in the terahertz range until now. A plastic ribbon printed with a gold herringbone pattern and sliced with staggered rows of tiny cuts was designed, taking inspiration from the Japanese art of kirigami which uses arrangements of cuts to create 3D structures from paper.

Each cut measured 500 microns long and 5 microns in height, and the cuts were spaced with a horizontal period of 600 microns and a vertical period of 105 microns. When the ribbon is stretched, the cuts open up and the slices of ribbon twist. The gold lines then guide the radiation, twisting it in turn.

"The lack of dynamic polarization modulators comparable to polarization optics used for other parts of the electromagnetic spectrum is impeding the proliferation of TCD spectroscopy," commented the team in its published paper. "We show that tunable optical elements fabricated from patterned plasmonic sheets with periodic kirigami cuts make possible the polarization modulation of terahertz radiation under application of mechanical strain."

According to the paper, a herringbone pattern of microscale metal stripes enables a dynamic range of polarization rotation modulation exceeding 80 degrees over thousands of cycles. Following out-of-plane buckling, the plasmonic stripes function as reconfigurable semi-helices of variable pitch aligned along the terahertz propagation direction.

In trials on materials such as the forewing of a scarab beetle, distinct TCD fingerprints associated with the helical substructure in the biocomposite could be detected. Analogous kirigami modulators could also enable other applications in terahertz optics, such as polarization-based terahertz imaging, line-of-sight telecommunication, information encryption and space exploration, according to the project team.

The team proposes the same design could be scaled for other types of radiation as well, with larger patterns interacting with microwaves or radio waves, or shrinking the pattern down to manipulate infrared light.

In addition to imaging living tissues, terahertz circular dichroism spectroscopy could also aid the development of new medicines based on large biological molecules such as proteins and antibodies. The project team anticipates that an early application could be to encrypt and decrypt communications on the terahertz spectrum, along with use of such kirigami devices on satellites to measure the twist in the terahertz spectrum of the universe's background radiation, providing valuable information about the earliest stars.