LASER 2017: The progress of terahertz spectroscopy

Panel session reports on the significant advances of real-world applications of terahertz technology. 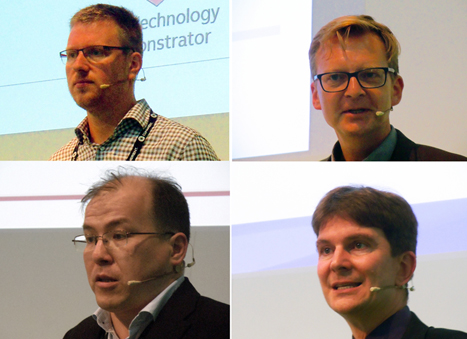 Practical – and increasingly commercially valuable – applications of terahertz radiation were described in an applications panel at LASER World of Photonics this week. A busy session in Hall B2, chaired by Dr. Thomas Renner, of Toptica Photonics and Prof. Dr. Martin Schell of HHI Fraunhofer Institute for Telecoms, introduced the technology.

Under consideration was its applications in areas as diverse as paper inspection during manufacture; remotely measuring opaque plastic pipe thicknesses; spotting defects in semiconductors; and analyzing the composition of chemical gases.

In most cases the terahertz radiation is generated by either femtosecond, DFB diode or quantum cascade lasers. This panel provided an overview of the established laser and THz antennae technologies, the required measurement technologies and first successful industrial realizations.

Firstly, Prof. Martin Koch of Philipps Universität Marburg, gave a general review of industrial applications of terahertz spectroscopy. He commented, “In the past few years spectroscopy at terahertz frequencies – the range between 0.1 and several THz – has enjoyed increasing interest.

Consequently, a multitude of applications have been developed for THz systems, including medical diagnostics, security applications and the monitoring of industrial production processes. The following talks will present several real-world applications of THz spectroscopy systems and recent progress.”

Inspection of paper and lacquer

Dook van Mechelen of Swiss industrial giant ABB Research told the conference: “The growing maturity of THz technology is paving the road towards industrial applications. Yet the process industry already successfully employs optical sensors and techniques. Therefore, a key question is how THz technology can differentiate itself and create additional value that justifies its current price tag.

“At ABB, we carried out a comprehensive study on a large variety of paper sheets in the industrial environment,” he said adding that in recent years terahertz technology has actually struggled to establish itself in the competitive optical metrology space.

“After a “peak of inflated expectations” as long ago as 2005, terahertz systems had started to enter the “trough of disillusionment.” But there are some grounds for optimism. ABB’s own production tests ranged from toilet tissue to cardboard, via 100 gsm copy paper.

He concluded: “Terahertz technology is definitely ready to be applied. It can do the job cheaper and better. But its feasibility needs to be shown in factories to create a market pull. A first industrial killer app could be a wet paint analyzer, as could be used in the automotive manufacturing industry.”

Dr. Michael Nagel of Protemics said, “Terahertz radiation has many benefits for different kinds of non-destructive inspection applications. However, a major limitation is its comparatively long wavelengths prohibiting the spatial resolution of micron-scale structures or defects through standard diffraction-limited optics. In his talk he presented a range of sensing applications enabled by photoconductive microprobe emitter and detector components.

Dr Gombo Tsydynzapov of Terasense stood in for colleague Dr. Vlacheslav Muravev. He said: “Real-time THz imaging is the most popular field of terahertz technology that is in the highest demand nowadays. Our multi pixel semiconductor THz cameras are based on two basic parts: an array of THz broadband detectors and IMPATT-diode sources.

“Our particular emphasis is on linear scanning of conveyer production environments and stand-off terahertz security scanner. Both of our solutions have undergone successful tests in security, textile and pharmaceutical industries. But despite the success, early tests have revealed a number of unforeseen limitations, which pose a number of challenges for the terahertz community, such as interference, diffraction and resolution. But on the positive side it works well in a number of situations, the more uniform the subject material the better, basically more R&D is necessary.”

Dr. Anselm Deninger of Toptica Photonics concluded the panel saying, “As of today, the most likely candidate for a terhertz ‘killer application’ is in industrial process and quality control. Requirements are stringent though: Depending on the application, an ideal system should accomplish hundreds or thousands measurements per second, and it should provide accurate and reproducible results even in a noisy environment.”

The second technique is still faster and detects the intensities of individual terahertz pulses, at measurement speeds as high as 100 MHz. This concept lends itself to screening of rapidly moving samples. I will present proof-of-principle measurements that demonstrate the capabilities of each method.