IHS Markit says solid growth in the US, Europe, and India will offset uncertainty in the key market of China this year. 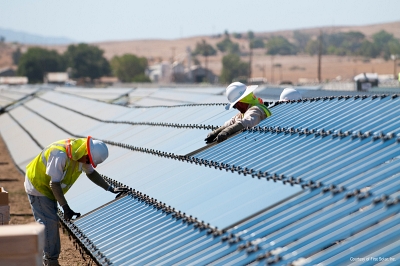 Global demand for photovoltaics (PV) is set to rise 14 per cent this year, as the technology becomes increasingly competitive with traditional energy sources.

That’s according to analysts at the market research and consultancy firm IHS Markit, who expect 142 GW of PV power to be added to electricity grids around the world in 2020.

If correct, it means that global installations of PV power should approach a nameplate capacity of some 750 GW by the end of the year - a total that would imply nearly 4 per cent of global electricity demand being met by PV generation.

“Another year of double-digit global demand growth in 2020 is proof of the continued and exponential growth of solar PV installations in the last decade,” said Edurne Zoco, director of clean technology and renewables at IHS Markit.

“If the 2010s were the decade of technology innovation, steep cost reductions, large subsidies and dominance by a few markets then 2020 marks the decade of emerging unsubsidized solar, diversification and expansion of solar installation demand across the globe, new corporate entry players, and increasing competitiveness versus conventional energy sources.”

US and Europe growth
The continued expansion in 2020 will be despite an expected dip in demand from China, the largest market for PV in recent years.

“[In China] solar demand in 2020 will be lower than historic installation peaks of 50 GW in 2017,” reports IHS. “Demand is in a transitional phase as the market moves towards solar being unsubsidized and competing with other forms of generation - and there is some lingering uncertainty while awaiting the release of the new 14th Five-Year Plan to be announced next year.”

Offsetting that weakness will be the US and Europe. In the US, PV installations are tipped by IHS to jump 20 per cent this year. Figures from the US-based Solar Energy Industries Association (SEIA) indicate that this would mean around 16 GW of PV deployments in 2020 - eclipsing for the first time the record total of around 15 GW set in 2016, when there was a rush to install ahead of anticipated changes to solar-related tax credits.

In Europe, the outlook looks sunny too. Thanks largely to a huge increase in PV deployments in Spain last year - the first major solar boom in the country since 2008 - installations across the continent more than doubled in 2019, compared with 2018. IHS is expecting another 5 per cent of growth this year, to around 24 GW.

The IHS figures differ somewhat from those produced by the Solar Power Europe industry group, which estimates 2019 installations at 16.7 GW, and is expecting another 21 GW to be added this year.

“There are several reasons for Europe’s new solar boom,” reported Solar Power Europe in its latest outlook, published last month. “First, the key to solar’s growth in the EU and beyond is its competitiveness. Solar power is often cheaper than any other power generation source today, and its attractiveness is only increasing as the cost reduction curve continues at a much faster pace than for any other technology.” 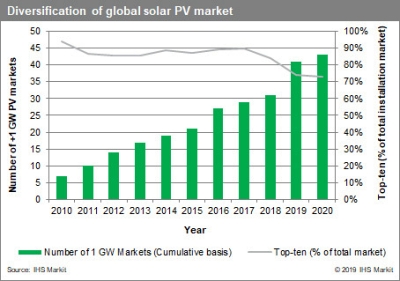 Austria and India
Aside from Spain, the fastest-growing markets for PV in Europe right now are Germany, the Netherlands, France, and Poland, while the Austrian government recently announced an ambitious scheme to fit a million homes in the country with solar power.

Walburga Hemetsberger, CEO of Solar Power Europe, said in response to that initiative: “We expect to see more of this kind of bold action as the 2020s are set to be a ‘solar decade’, with EU countries increasingly opting for solar to meet the 32% renewable energy target by 2030.”

The organization’s market outlook suggests that the European Union solar market will set new installation records in both 2022 (24.3 GW) and 2023 (26.8 GW).

Another key geography is India, which is now home to the single largest PV generation site in the world. Pavagada Solar Park boasts a nameplate output of 2050 MW.

IHS said of the wider PV prospects in India: “Following a flat year in 2019 due to policy uncertainties and the impact of import duties on solar cells and modules, installations are expected to grow again and surpass 14 GW in 2020. Lower module prices and a large pipeline of projects are expected to spur the return to growth.”

Overall, the IHS and other market outlooks indicate that global solar installations are well on track to pass the terawatt milestone by 2023, as predicted by PV specialists in May 2018 - and perhaps even earlier than that.