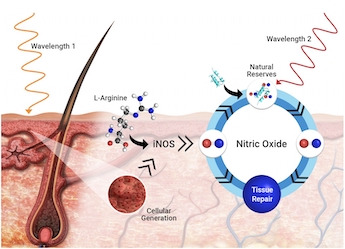 Revian, a North Carolina-based developer of phototherapy devices, has announced that a foundational patent for its skin and hair rejuvenation technology has been issued.

The company is developing Revian Red, a wearable cap controlled by a smartphone app, which a patient wears for a few minutes each day. The cap illuminates the scalp with dual-wavelength LED light, said to accelerate scalp healing and renew cells associated with hair growth and retention.

Issued to Revian under its former name of PhotonMD Inc, the patent relates specifically to the phototherapeutic modulation of nitric oxide in mammalian tissue.

"This is a groundbreaking approach to the therapeutic use of light," said Nathan Stasko, executive chairman of Revian. "By stimulating the body’s internal mechanisms for the generation and release of nitric oxide, we are able to realize the therapeutic benefits of the molecule in the body without the challenges of pharmaceutical drug development."

Revian Red is said to be the first product to combine LED technology and the growing field of research into the biomedical role of nitric oxide. The device delivers 620 and 660 nanometer illumination, and is intended to both stop hair loss and stimulate new hair growth, providing a treatment for men and women suffering from androgenetic alopecia.

An original clinical trial on 36 enrolled subjects showed that the Revian Red device produced an average of 21.3 more hairs per square centimeter compared to those who wore a similar cap but did not have light therapy, according to Revian. A larger clinical trial on 161 participants has also taken place and was concluded in 2019, with results not yet published.

PhotonMD was founded in 2016 to develop methods of stimulating the body's natural processes with light as a way to rejuvenate hair and skin.

The company was originally part of Novan, a clinical-stage biotechnology company working on a range of nitric oxide-based biomedical therapies, in recognition of the complex role that the compound is now known to play in immunology, cardiology and neurology.

Novan is focused primarily on medical dermatology, a portfolio within which light-based medical devices were deemed to be a poor fit. PhotonMD was spun out as a portfolio company of Know Bio, created in 2015 to house all the non-dermatological assets from Novan.

Know Bio completed a $30 million round of equity financing in May 2019, in support of ongoing commercialization of technology from its subsidiaries PhotonMD and Vast Therapeutics, which is developing a nitric oxide powder platform to treat cystic fibrosis.

The Revian Red platform is said by the company to exploit recent developments in LED performance and narrow wavelength emission, which allow the sources to provide broader scalp coverage and better skin penetration than the red lasers previously used in low-level laser therapy for similar conditions.

"The body’s natural capabilities to heal and regenerate itself can be unlocked using light," said Gerry Negley, co-inventor of the platform. "With this technology, we are doing just that by using a proprietary combination of monochromatic LEDs."