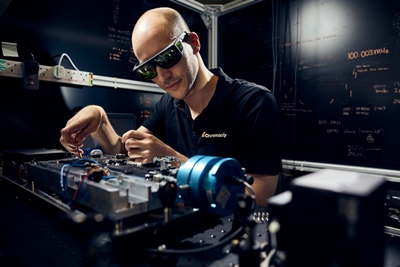 Ultrafast laser vendor Chromacity has joined a university-led project to develop a compact, and relatively low-cost source for multi-photon microscopy.

Coordinated by a team at Heriot-Watt University, the three-year “Deep Tissue” effort builds on earlier work by Derryck Reid from the university’s Institute of Photonics and Quantum Sciences (IPAQS).

The Edinburgh, UK, firm will also be working alongside microscope developer Scientifica, with the goal of creating a laser capable of gathering tissue data to more than twice the depth of the current state-of-the-art, and at around one-third of the cost.

“Three-photon imaging requires [shorter than] 150 femtosecond pulses with [greater than] 0.5 W average power before the microscope, which are often not designed for high transmission at these longer wavelengths,” the company added.

Awarded £360,000 in funding by the UK’s Science and Technology Facilities Council (STFC) earlier this year, the project entitled “Harnessing Photonic Technologies for Deep-Tissue Imaging” is led by principal investigator Richard McCracken at Heriot-Watt.

The idea is to demonstrate laser sources that are specifically designed for the three-photon nonlinear process. While three-photon excitation systems based on optical parametric amplifiers (OPAs) are currently available, they are regarded as both highly inefficient and prohibitively expensive for the majority of research facilities.

Three-photon microscopy is seen as particularly powerful for tissue analysis, as it allows high-resolution, non-invasive imaging of individual cells, without damaging surrounding tissue.

“This is a hugely exciting project to be involved with and it could significantly help open up a host of new research areas by providing a specialist technology at a greatly reduced cost,” McCracken said.

“The commercialization of an affordable laser for deep tissue imaging will benefit researchers across the life sciences, including fields such as neuroscience - where imaging of the brain through intact mouse skulls has already been demonstrated.

“Many future applications of this technology have not yet been identified due to the prohibitive cost of suitable laser systems, but our collaboration will remove this barrier to development.”

Specialist tasks
According to the team, companies are likely to spend up to £350,000 on a laser source that provides the closest fit to their requirements. Aside from that significant expense, the technology is typically bulky, and only capable of analyzing up to half a millimeter beneath the surface of biological material.

“We will combine patented Heriot-Watt University intellectual property in the generation of few-MHz high-energy OPO pulses with know-how in the construction of dispersion-controlled compact cavities to develop a commercial alternative to the dominant market offering,” states the project abstract.

If all goes according to plan, a prototype version of the technology should be ready around a year from now.

McCracken adds that the development would also open up a host of new research areas, beyond tissue imaging and into wider applications in biotechnology. “The laser can even be used to image into the roots of plants such as rice and wheat, in order to identify bacteria that inhabits growth and help with crop productivity,” he added.

“At present, companies who want to carry out this research must purchase lasers that are capable of doing a variety of analysis, which means additional costs. What we want to do is create a laser that is carefully designed to carry out a specialist set of tasks.

“This means we can develop and invest in the necessary components, allowing us to significantly reduce overall costs while giving the end-user greater scope to carry out their research.”