Bessel-beam technique licensed from HHMI to be offered as add-on to Thorlabs platforms. 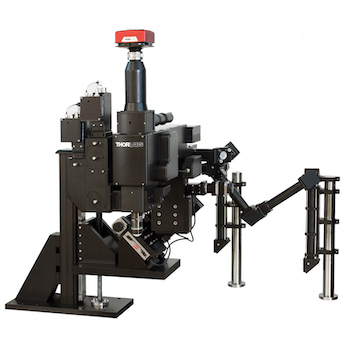 The technique is said by the company to allow scanning of large volumes of a biological sample simultaneously, effectively converting traditional 2D imaging frame rates into 3D volume rates. Previous approaches have used physical movement of a focused beam inside the tissue, but the new method provides video-rate volumetric functional imaging of neuronal pathways and interactions in vivo, according to Thorlabs.

"Like the commercialization of our 2-photon random access mesoscope, which was developed in Karel Svoboda's lab at Janelia Research Campus, and joint work with Michael Hausser from the University College London on holographic photostimulation, we seek to provide the supporting tools necessary for cutting edge research in the field of neuroscience," commented Sam Rubin of Thorlabs Imaging Systems.

A Bessel beam is a theoretical form of illumination in which a beam of light does not diffract or spread out as it travels. Although a true Bessel beam cannot in practice be created, advances in optical focusing and diffraction gratings have made approximations of Bessel behavior increasingly feasible.

The multi-photon Bessel beam-based volume imaging technique licensed to Thorlabs was originally developed at the Janelia lab of Na Ji, who has now moved to the University of California, Berkeley.

Imaging of neurons with single-synapse resolution

Work on Bessel beam technology has been a focus of research at Janelia for some time, as a way to tackle a long-standing challenge in plane illumination microscopy whereby the light sheets employed are usually too thick to provide much benefit for imaging organelles within individual cells.

Bessel beams allow the creation of much thinner light sheets, better suited to long-term dynamic live cell imaging thanks to a combination of enhanced axial resolution and reduced exposure time, minimizing photobleaching and phototoxicity. Work by Eric Betzig at Janelia has also seen Bessel beam illumination used as a platform for super-resolution microscopy, where confinement of the laser excitation makes better use of the limited fluorescence photon budget.

Use of a Bessel focus for in vivo brain imaging is attractive because of its robustness against axial motion, a problem not easy to correct with a conventional Gaussian focus, according to Ji's published research. Two-photon fluorescence microscopy with an approximate Bessel beam has previously allowed volumetric imaging of neurons and associated neural networks, and Ji's work at Janelia included the extension of this principle to three-photon fluorescence microscopy with an axially elongated Bessel focus.

"To understand information processing in neurons and neural networks, we need to record neural activity at high rates throughout 3D volumes," comments the Ji lab's project website. "Taking advantage of the fact that, during most in vivo brain imaging experiments, the structures of interest are stationary, we obtained volume information by scanning an axially extended focus in 2D. Using wavefront engineering to generate Bessel foci optimized to maintain high lateral resolution, we demonstrated 30 Hz volumetric imaging of neurons and neural compartments with single-synapse resolution."

Thorlabs has announced that the new multi-photon volume imaging technique will be offered as an add-on module for the company's multi-photon Mesoscope and Bergamo imaging systems, in either two-photon or three-photon forms.