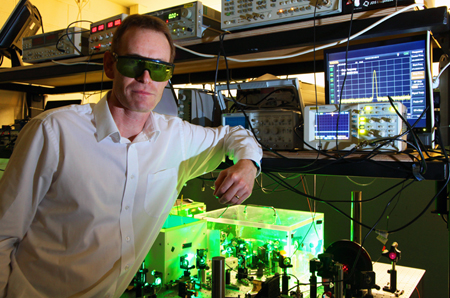 Derryck Reid, Director of the EPSRC Centre for Doctoral Training in Applied Photonics.

A team of Scottish scientists is developing a new kind of laser that could help astronomers to find small, “Earth-like” planets outside our solar system or detect the presence of hazardous chemicals from a safe distance.

The team at Heriot-Watt University, Edinburgh, is working as part of an international consortium that has recently secured €2m to develop optical parametric oscillator frequency comb lasers, which will achieve a far greater degree of accuracy than has been previously possible.

Known as a frequency comb laser, because its output in frequency can be considered as a pattern of closely-spaced comb teeth, the new laser operates in the infrared region, which conventional frequency-comb lasers cannot do, making it particularly useful for applications such as infrared gas sensing, metrology and spectroscopy. The researchers say that OPO lasers offer enormous opportunities for exploitation in metrology and broad spectrum detection, in instruments ranging from telescopes to hyperspectral imagers.

Now the team at Heriot-Watt University, which invented the femtosecond OPO comb technology at the core of the international Metrocomb project, is to work with colleagues in other universities and companies to explore new ways of improving OPO frequency comb lasers.

One application for the new laser will be in astronomy and the hunt for planets orbiting stars outside our solar system. While larger planets (Jupiter sized and above) can now be detected and measured quite easily with precision spectrographs, astronomers looking for smaller 'Earth-like' stars need more sensitive techniques which the new laser will facilitate.

The Heriot-Watt team has this month secured additional funding of £250,000 from the Science and Technology Facilities Council to develop frequency combs for astronomy. Speaking about the work Professor Derryck Reid, Director of the EPSRC Centre for Doctoral Training in Applied Photonics, School of Engineering and Physical Sciences, Heriot-Watt University, said, “The new laser we are developing will offer unprecedented detection sensitivity and measurement accuracy.

“It has the potential to transform spectroscopy in the 'molecular fingerprint' region, to deliver real-time imaging with molecular identification, trace chemical detection and medical breath analysis. It also has particularly exciting applications in astronomy which we are delighted to have secured further funding to explore.”

“We probably won’t be doing any actual at-sky work for several years but the promise of this technology is that it offers much better spectral resolution for analyzing star light signals and observing the wobble produced when Earth-like planets interfere with such light rays. Another experiment could involve looking at changes in star light patterns over several years to better understand how the universe is expanding and the consequences for fundamental constants.”

Such lasers are ideal for applications in metrology because they provide a benchmark in frequency, against which other lasers can be calibrated. For example, the precision frequency scale produced by frequency comb lasers can be used to accurately calibrate the spectrographs in telescopes so that they have sufficient accuracy to detect even small “Earth-like”planets orbiting distant stars.

Metrocomb is an international consortium of small and medium enterprises and academics, coordinated by M Squared Lasers, the lead industrial partner. The project aims to produce intellectual property that can be exploited by the SME partners, across the supply chain covering optics, crystals, lasers and OPOs. The project, which started in August 2013, has received funding from the European Union's Seventh Framework Programme (Grant agreement n° 605057). Total project costs will be €1,955,360.00, with a total contribution from the EU of €1,499,000.00.