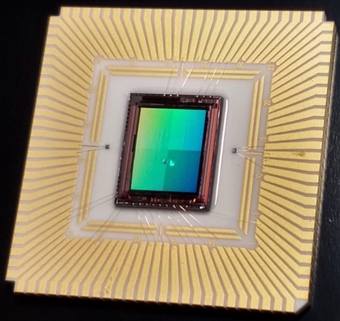 Researchers at Sandia National Laboratories working to improve infrared sensors say that their gold nano-antenna technology is ready to be transferred out of the lab and into commercial development.

Working under project lead David Peters at Sandia's National Security Photonics Center, the Albuquerque team claims that the new detectors improve sensitivity by a factor of three, while reducing dark current by as much as two orders of magnitude.

The higher performance results from the way that the minuscule antennas concentrate light onto a much thinner sensor layer than is typically found in infrared sensors. If successfully transferred into commercial use, it ought to result in cameras and sensors capable of delivering much clearer thermal images – with potential applications ranging from deep-sky astronomy to security.

Detector thickness trade-off
Today’s state-of-the-art thermal imagers are based around detectors with a sensor layer thickness of 5-10 µm. The detector material absorbs incoming heat and converts it into an electrical signal that can be collected and turned into an image.

Sandia explains that the thickness of the detector layer determines how much heat can be absorbed and read by the camera, but with the trade-off that thicker layers produce noisier images.

“The detector material is always spontaneously creating electrons that are collected and add noise to the image, which reduces image quality,” Peters said in a Sandia release. “This phenomenon, called dark current, increases along with the thickness of the detector material — the thicker the material is, the more noise in the image it creates.”

By introducing the sub-wavelength-scale gold nano-antennas, in the form of a patterned array of squares or cross shapes, light is concentrated on a thinner layer of detector material (Sandia says it is just a fraction of a micron thick) without compromising the electrical signal produced.

Tech transfer
Peters adds that with the new approach it is possible to dramatically expand the amount of information acquired in an image, by careful control of the spectral response at the pixel level.

Seen as something of a high-risk approach that was not guaranteed to work, Peters says that with the proof of concept now demonstrated the technology can now be spun off into commercial use. He also points out that the approach could be applied to different detector types, giving sensor manufacturers the opportunity to integrate the technology with their existing detectors.

“This project is a perfect example of how a national lab can prove a concept and then spin it off to industry where it can be developed further,” he said.

The Sandia team is now pursuing leads, in a bid to establish a "Collaborative Research and Development Agreement" (CRADA) that is designed to speed the technology transfer process.