Optical communications for CubeSats and solar-sail propulsion projects each get $400,000 for nine-month study. 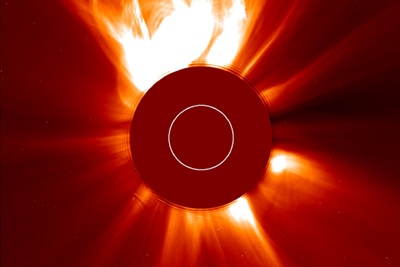 Funded under NASA’s Heliophysics Solar Terrestrial Probes program, which is managed by the Goddard Space Flight Center, the two technologies involved are optical communications for CubeSats, and a giant solar sail for propulsion.

Solar weather
Each of the nine-month concept studies, selected for their combination of scientific potential and technical feasibility, is set to receive $400,000. NASA is hoping to gain greater insight into the nature of space throughout the solar system - particularly how it changes in response to the constant flow of energy and particles from the Sun, and their interaction with planetary atmospheres.

Peg Luce, the deputy director of the NASA’s heliophysics division, said: “This is the first time that our heliophysics program has funded this kind of technology demonstration. Providing the opportunity to mature and test technologies in deep space is a crucial step towards incorporating new techniques into future missions.”

The first of the projects is actually looking to develop two different technologies: one of those is an optical communications link for small satellites and CubeSats that is less complex than current systems.

Switching from RF to optical links in space offers the potential for a hundred-fold increase in deep-space data rates, while also reducing the burden on NASA's existing Deep Space Network. “Such technology could help support future small satellite constellations that require high data rate communications systems,” stated the agency, which has appointed Antti Pulkkinen at Goddard as principal investigator.

Solar cruiser and coronagraph
Meanwhile the “solar cruiser” project, managed out of the Marshall Space Flight Center in Huntsville, Alabama, will aim to demonstrate the viability of an 18,000-square-foot solar sail as a propulsion system. “Such a system could provide views of the Sun not easily accessible with current technology,” NASA noted.

The second part of this project would involve a coronagraph instrument to enable simultaneous measurements of the Sun's magnetic field structure and velocity of coronal mass ejections (CMEs).

CMEs send colossal amounts of energy, particles, and radiation into space that can set off space weather storms capable of interfering with key terrestrial infrastructure, including electrical grids and communications networks.

At the end of the nine-month study period, one of the proposals will be selected to progress to launch, as a secondary payload with NASA's Interstellar Mapping and Acceleration Probe. The launch is currently scheduled for October 2024.

Thomas Zurbuchen, associate administrator at NASA's Science Mission Directorate, said that by focusing on small satellites and exploiting the cost savings of sharing a launch, it was possible to test and advance cutting-edge technologies at a reasonable cost.

“We are leading the charge in using this innovative solution to test new mission paradigms and technologies and, in turn, to reap great rewards researching our neighborhood in space,” he added.