Laser communication system and solar sail selected for disruptive development and launch in 2015-2016. 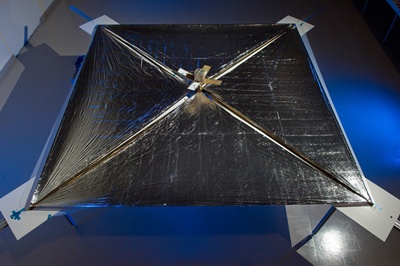 NASA has chosen to fast-track two high-payoff photonics technologies not yet developed by industry for use in its future missions, in an estimated $175 million investment.

The agency will work on a high-speed laser communication system 100 times faster than existing links, as well as a so-called “solar sail” designed for propulsion that will be seven times larger than any yet flown in space.

Alongside a new kind of atomic clock, the “technology demonstration missions” should be completed within four years (launches featuring the technologies are earmarked for 2015 and 2016) and deliver three new flight-capable technologies that would not be otherwise developed by industry as they are deemed too high-risk.

Clearing orbital debris
The laser communication project was proposed by David Israel, from NASA’s Goddard Space Flight Center, and is aimed to be directly applicable to the next generation of NASA's space communications network.

After the demonstration, the developed space and ground assets will be qualified for use by both near-Earth and deep space missions requiring high bandwidth and a small ground station reception area.

Nathan Barnes from L’Garde Inc., in California, proposed the extra-large solar sail. Aside from propulsion, it is said to be potentially applicable to a wide range of future space missions, including an advanced space weather warning system to provide more timely and accurate notice of solar flare activity, as well as the removal of orbital debris.

NASA's Office of the Chief Technologist is planning to make a total investment of approximately $175 million in the three missions, contingent on future appropriations. Each of the selected teams also will receive funding from partners who plan on using the technologies as part of future space missions.

Projects include all elements of the flight test demonstration including test planning, flight hardware, launch, ground operations, and post-testing assessment and reporting. Each team has proposed between one and two years of spaceflight operations and data analysis. To reduce cost, the technology demonstrations will ride to space with other payloads aboard commercially provided launch vehicles, with launches anticipated in 2015 and 2016.