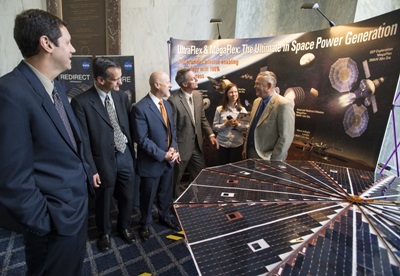 The US presidential budget request for NASA’s fiscal year 2015 includes support for the launch of the James Webb Space Telescope (JWST) in October 2018, the development of new optics and infrared detector and coronagraph technology, and a high-powered solar propulsion system to redirect an asteroid.

Totaling $17.5 billion, which the agency hopes will be boosted by an extra $900 million pending Congressional approval of President Obama’s “opportunity growth and security” initiative, the proposed budget compares with the $16.9 billion spent in fiscal 2013 and $17.6 billion enacted for the current year.

NASA chief Charles Bolden highlighted the continuation of a “stepping stone” approach towards goals including eventually sending a human crew to Mars in the 2030s, as well as ongoing support for the International Space Station for at least another decade and the launch of an unprecedented five Earth science projects this year.

With $645 million allocated to JWST for fiscal 2015, the year should see delivery of the primary mirror backplane and backplane support to NASA’s Goddard Space Center ahead of the planned launch.

With completion of the problematic and delayed JWST project finally in sight, developments in space astronomy will turn to the planned Wide-field Infrared Survey Telescope (WFIRT) mission. Based on two “Hubble-class” 2.4 meter telescopes, the project also plans to deploy a high-contrast coronagraph that it is hoped will significantly advance direct imaging of exoplanets.

Major advances in the scientific study of dark energy and galaxy formation are also expected, and the development of new detectors will be crucial.

Economic impact
But Bolden also pointed out the scope for real-world economic benefits of the administration’s pioneering aeronautics research, which has a focus on reducing fuel consumption, noise and emissions, adding: "All of the investments we make at NASA help drive technology and innovation, spur economic activity and create jobs.”

Under the planned $886 million in proposed additional funding for fiscal 2015, NASA will focus on specific priorities. “This ‘invest in America’ initiative recognizes that the type of innovation and technology development we do helps create opportunity, grow our economy and secure our future,” Bolden said.

Another key goal is to send a crew to an asteroid by 2025, and NASA says that it is formulating an “asteroid redirect” mission. That will involve the deployment of a robot powered by solar electric propulsion – a propellant-free technology that could also be used to transfer satellites between orbits and deal with their increasing power demands.

Solar sails
Funding for that solar propulsion development is covered by a proposed $706 million budget earmarked for space technology (up from $576 million this year), which will also support seven launches in a two-year window.

The technologies include a deep-space atomic clock, ongoing support for space-to-ground laser communications slated for demonstration in 2018, and the so-called “Sunjammer” solar sail. $133 million has been allocated for early work on the asteroid mission, including the solar propulsion technology.

Sunjammer represents NASA’s first solar sail mission to deep space, and is seen as the final step before such propulsive technologies are integrated into future space missions.

Using a solar sail will enable NASA to position a solar wind analyzer and magnetometer developed by the UK Space Agency closer to the Sun than is presently possible – something that will give an earlier warning of major geomagnetic solar storms like the 1859 event that produced an aurora as far south as the Caribbean.

A similar event today would cause massive disruption to electrical networks and air travel, but with current technologies only a 45-minute warning of the impending disaster would be possible. Sunjammer should increase that time by one hour, which is said by its proponents to be a “game-changer”.