A tiny NASA satellite has used a laser to send information 2400km through space to the ISARA CubeSat. 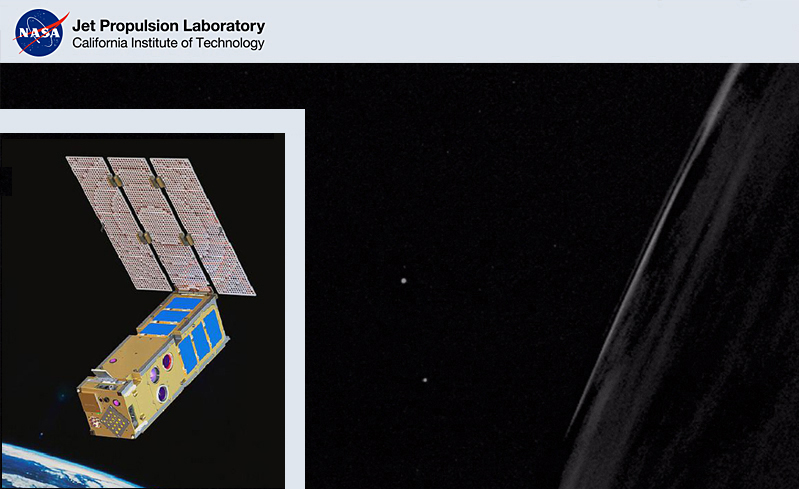 A brief laser flash at the center of the main photo was part of an experiment conducted 450km above the Earth's surface (RHS) by two NASA CubeSats. In it, one small satellite used a laser to send information to the ISARA CubeSat, enlarged and inset, left, which is managed by NASA's Jet Propulsion Laboratory.

NASA has announced that two of its CubeSats have been teamed up in an impromptu optical communications pointing experiment. In a video on the NASA website the laser beam can be seen as a brief flash of light close to the center of the focal plane, to the left of Earth's horizon.

The light is transmitted from the laser communications system onboard one of two Optical Communications and Sensor Demonstration (OCSD) spacecraft. The laser flash was recorded by a short-wavelength infrared camera, one of three cameras comprising the CubeSat Multispectral Observation System (CUMULOS) payload, onboard the Integrated Solar Array and Reflectarray Antenna (ISARA) spacecraft.

The optical communications beam was deliberately aimed at and swept across the ISARA camera. This demonstration shows that an optical crosslink between two CubeSats is feasible with proper pointing and alignment of the emitting and receiving spacecraft.

NASA comments that, "Optimizing this capability could enable constellations of small satellites to transfer high volume data between one another in low-Earth orbit or even in orbit around the Moon."

Characteristics built into the design and operation of small spacecraft enable impromptu experiments such as this optical crosslink test. Their flexibility and responsiveness provide mission operators the ability to take advantage of opportunities to perform additional maneuvers and procedures not previously envisioned for a particular mission.

Originally designed to be Earth facing, both the ISARA camera and OCSD laser were tipped onto their sides to point at one another to accomplish this additional crosslink achievement, an operation much more difficult for larger spacecraft.

Other features visible in the NASA-JPL gathered images include a star (R Doradus, which is one of the brightest infrared stars in the sky) that can be seen moving diagonally down toward the right side of the frame as the satellites orbit Earth, and Earth's horizon as it meets space. Other subtle stationary points of white are "hot pixels" or digital noise from the camera.