Process exploits interaction of light and sound waves to suppress the scattering by material defects. 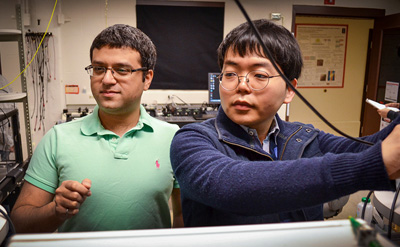 Engineers at the University of Illinois, US, have found a way to redirect misfit light waves to reduce energy loss during optical data transmission. The researchers have exploited an interaction between light and sound waves to suppress the scattering of light from material defects – which, they say, could lead to improved fiber optic communication. Their results are published in Optica.

Light waves scatter when they encounter obstacles, be it a crack in a window or a tiny flaw in a fiber optic cable. Much of that light scatters out of the system, but some of it scatters back toward the source in a phenomenon called backscattering, the researchers said.

Mechanical science and engineering professor Gaurav Bahl, who led the study, commented “There is always a little bit of imperfection and a little bit of randomness in the materials that we use in any engineered technology. For instance, the most perfect optical fiber used for long-range data transmission might still have some invisible flaws. These flaws can be a result of manufacturing, or they can appear over time as a result of thermal and mechanical changes to the material. Ultimately, such flaws set the limits of performance for any optical system.”

Previous studies have shown that undesirable backscattering can be suppressed in special materials that have certain magnetic properties. However, these are not viable options for today’s optical systems that use transparent, nonmagnetic materials like silicon or silica glass, he said. Bahl and graduate student Seunghwi Kim used an interaction of light with sound waves, instead of magnetic fields, to control backscattering.

Usually, light waves travel through most materials at the same speed irrespective of direction, Bahl said. “But, by using some direction-sensitive opto-mechanical interactions, we can break that symmetry and effectively shut down backscattering. It is like creating a one-way mirror. By blocking the backward propagation of a light wave, it has nowhere to go when it encounters a scatterer, and no other option than to continue moving forward.”

To demonstrate this phenomenon, the team sent light waves into a tiny sphere made of silica glass, called a microresonator. Inside, the light travels along a circular path like a racetrack, encountering defects in the silica over and over again, amplifying the backscattering effect. The team then used a second laser beam to engage the light-sound interaction in the backward direction only, blocking the possibility of light scattering backward. What would have been lost energy continues moving forward, in spite of defects in the resonator.

Being able to stop the backscattering is significant, but some of the light is still lost to side scattering, which scientists have no control over, Bahl said. “The advance is therefore very subtle at this stage and only useful over a narrow bandwidth. However, simply verifying that we can suppress backscattering in a material as common as silica glass suggests that we could produce better fiber optical cable or even continue to use old, damaged cable already in service at the bottom of the world’s oceans, instead of having to replace it.”

The team says that trying this experiment in fiber optic cable will be the next step, with the aim of showing that this phenomenon is possible at the bandwidths required in optical fiber communications.

“The principle that we explored has been seen before,” said Bahl . “The real story here is that we have confirmed that backscattering can be suppressed in something as simple as glass, using an opto-mechanical interaction that is available in every optical material. We hope that other researchers examine this phenomenon in their optical systems, as well, to further advance the technology.”

The US National Science Foundation, Air Force Office of Scientific Research and the Office of Naval Research supported this study.