Rheinmetall and MBDA to develop laser weapon for German Navy

Partners will construct and test a high-energy laser demonstrator for new “K130” corvette. 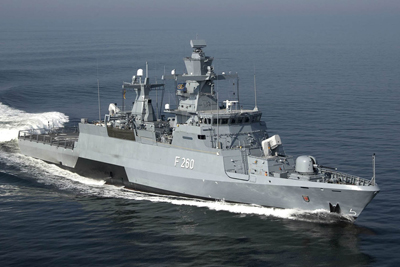 Rheinmetall and MBDA Deutschland have agreed to collaborate on developing new high-energy laser effectors for warships. The two companies intend to construct, integrate and test a prototype laser demonstrator for the German Navy’s K130 corvette.

Capable of engaging targets at the speed of light with extreme precision and minimal collateral damage,.

Now, for the first time, the laser weapon capabilities of achieving extreme precision while causing minimal collateral damage, will be investigated under quasi-operational conditions using a demonstrator installed on board a German corvette. The partners commented, “lasers constitute a whole new dimension in defence technology.“

The K130 Braunschweig class is Germany's newest class of ocean-going corvettes. Five ships have already replaced the Gepard-class fast attack craft of the German Navy. Then in October 2016, it was announced that a second batch of five more 90m-long corvettes is to be procured from 2022–25, at a cost of €400 million per ship.

The details and division of responsibilities between the two companies will be determined as soon as the performance specification is made available by the German Federal Office for Bundeswehr Equipment, Information Technology and In-service Support, Germany’s military procurement agency.

Peter Heilmeier, Head of Sales & Business Development at MBDA Deutschland, commented, “Cooperation between Rheinmetall and MBDA will be particularly beneficial for the Bundeswehr. Both companies will be leveraging their respective special strengths to make this German Navy project a resounding success.”

Werner Krämer, Managing Director of Rheinmetall Waffe Munition, said, “We’re going to be cooperating closely to put the military potential of laser technology to work for the Bundeswehr, boosting its operational readiness and combat effectiveness. Lasers offer new tactical possibilities for military whether on land, at sea or in the air.”

MBDA is a European group that designs and produces missiles and missile systems that correspond to the full range of current and future operational needs of the land, sea and air armed forces. It is jointly owned by Airbus (37.5 %), BAE Systems (37.5 %), and Leonardo (25 %).

With a significant presence in five European countries and the USA, in 2018 MBDA achieved revenue of €3.2 billion, with an order book totaling €17.4 billion. MBDA currently has more than 90 armed forces customers across the world. The group offers a range of 45 missile systems and countermeasures products already in operational service and more than 15 others currently in development.

Rheinmetall is publicly-traded corporation based in Düsseldorf, Germany, dedicated to the twin future imperatives of security and mobility. Consisting of two closely integrated units – Automotive and Defence – Rheinmetall employs a 23,000-strong workforce at over 120 locations and production facilities around the globe. Last year, total Group sales exceeded €6 billion.