NASA invests $45M in US firms for space technology

Development funds allocated to many photonics-related developments and companies across America.

NASA is investing in technologies to enable Moon-to-Mars developments.

US space agency NASA has selected 363 proposals from small businesses and research institutions across 41 states to help advance the types of technological capabilities needed for future space missions, and to support the agency in other areas. Many of the target projects are in photonics-related technologies (see list, below).

American businesses are expected to help NASA land astronauts on the Moon (again) in five years and establish a sustainable presence there, as part of the agency's larger Moon to Mars exploration project.

These selections have an estimated value of more than $45 million and are part of NASA's Small Business Innovation Research and Small Business Technology Transfer programs.

"We are excited about the entrepreneurial, innovative ideas that these small businesses are bringing to the table," said Jim Reuter, associate administrator for NASA's Space Technology Mission Directorate. "The technologies show great promise in helping NASA achieve its objectives across all mission areas, including our efforts to send American astronauts to the Moon, and then on to Mars, while also providing a long-term boost to the American economy."

Nearly one hundred of the selected companies will be first-time recipients of a NASA SBIR or STTR contract. More than 20% of the businesses are from underrepresented communities, including minority and women-owned businesses.

The selected proposals will support aeronautics, human space exploration and operations, science, and space technology. The selections cover research and development for a variety of applications, such as:

Proposals were selected according to their technical merit and feasibility, as well as the experience, qualifications and facilities of the submitting organization. Additional criteria included effectiveness of the work plan and commercial potential.

NASA's SBIR and STTR programs encourage small businesses and research institutions to develop innovative ideas that meet the specific research and development needs of the federal government. The programs are intended to stimulate technological innovation in the private sector, increase the commercial application of research results, and encourage participation of socially and economically disadvantaged persons and women-owned small businesses. 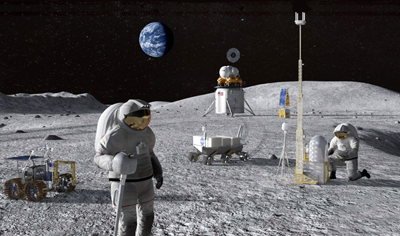 NASA is planning to land astronauts back on the Moon by 2024.

The NASA SBIR and STTR programs are conducted in three phases:

To the Moon… and beyond