Giant components fabricated at the Caris Mirror Lab will take astronomy to the next level. 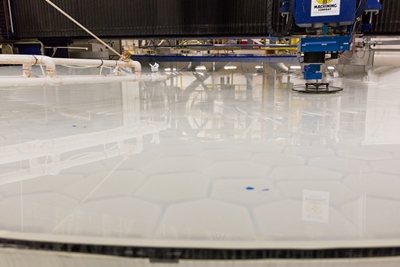 by Ford Burkhart
Step onto a catwalk inside the sprawling Richard F. Caris Mirror Lab and you enter a hangar-like cavern, and another world of astronomy.

You look down on a slowly spinning, bluish disk that looks a bit like a carousel. In fact, it’s the latest super-sized tool that will help astronomers observe the very edge of the universe.

To the uninitiated, the first sight of a Caris-fabricated mirror is a little like discovering a flying saucer that has been captured and then moved indoors – perhaps even a contraption worthy of a Monty Python sketch.

The laboratory, part of the University of Arizona in Tucson, is the world’s only facility capable of producing mirrors with the requisite combination of size and accuracy for the primary optics needed to collect light at huge new observatories like the Giant Magellan Telescope (GMT) and the Large Synoptic Survey Telescope (LSST).

State-of-the-art requirements mean it can take eight years to grind a mirror to the millionth-of-an-inch precision demanded. The Caris mirror team is now working to reduce the fabrication time to five years, but the price tags are still enormous: up to $25 million per component.

Eyes on the sky
At Arizona’s Steward Observatory, which oversees the Caris laboratory, deputy director Dennis Zaritsky remarks that the crew is celebrating this summer.

“We are excited to see our mirror going to the LSST in Chile,” he said. “This telescope and its associated survey, which will begin in the next few years [following “first light” in 2021, full science operations are slated to begin in 2023], will revolutionize astronomy over the next decade by making an unprecedented, detailed ‘movie’ of the sky.”

Beyond that, Zaritsky said, the team is pleased to see mirrors for the GMT continue rolling out of the laboratory. “Progress on the polishing of these mirrors has been even greater than our optimistic predictions,” he added.

Designed to different but still huge specifications, the GMT will be able to view some of the very first objects ever to form in the universe - as well as Earth-like exoplanets orbiting relatively nearby stars. “Extremely large telescopes, like the Giant Magellan Telescope, will be the major leap forward in astronomy in the mid to late 2020's,” Zaritsky said. 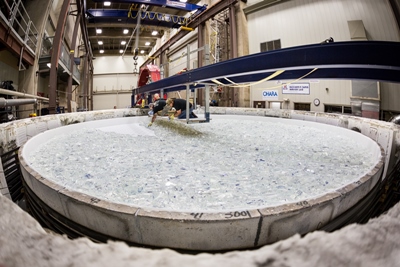 Honeycomb design
Named in 2015 for Richard F. Caris, an optics industrialist whose gift of $20 million allowed the university to become a founding partner of the GMT project, the laboratory has produced mirrors over the past 35 years that are now operating at 12 of the world’s leading observatories.

Once all seven GMT mirrors are in place, forming a pattern resembling a giant six-petal flower, the telescope’s collecting area will measuring approximately 80 feet across. All being well, the observatory should be up and running in 2025.

Today in the Caris lab, a superheated mirror turns, while an oven roars with an orange glow at more than 2000°C. That’s hot enough to melt the E6 borosilicate glass, provided by Japan’s Ohara Corporation.

When the glass temperature reaches 1380°C, centrifugal forces allow the soft molten mass to ease into the desired disk shape as the mirror spins at up to seven times per minute. At 2150°C, the mirror makers observe what they call the “high fire” celebration, as the molten component reaches its peak temperature. Shortly after that, a three-month cool-down, or annealing stage, begins.

The University of Arizona’s unique honeycomb design enables production of mirrors that are, unlike their predecessors, lightweight and strong as well as being very large.

Polishing to perfection
The mirrors currently being created at the Caris lab are destined for the billion-dollar GMT. Twenty-four hours a day, twin polishers on long, thin metal arms glide across the 8.4 meter-diameter parabolic mirror surface. In May, the lab completed the second “petal” of the primary optic design.

And on June 18, one of those mirrors departed via the giant doors of the laboratory in the dark of night - occupying more than two traffic lanes in Tucson as it inched its way to a storage site south of town. The Caris team is now working on GMT mirrors 3, 4 and 5.

While such important labs are often in central locations, the university decided to tuck the Caris Mirror Lab under the student seats on the east side of the UA football stadium. Ever since 1985, it has been making its world-class mirrors, initially with support from the US Air Force to produce 12-foot components.

Then in 1992 it began making the 27-foot optics for the Large Binocular Telescope (LBT), positioned locally on Mt. Graham, northeast of Tucson.

But the optical components being fabricated right now will take things to an entirely new level. The groundbreaking astronomical imagery that we will see from the middle of the next decade, and which will wow the public just like Mt. Palomar and Hubble did before, is made possible by the extraordinary capability inside the Tucson lab.