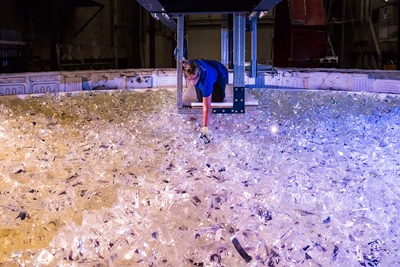 Casting of the fifth mirror segment for the billion-dollar Giant Magellan Telescope (GMT) has begun at the University of Arizona's Richard F. Caris Mirror Laboratory.

The huge optical component is being cast from 17.5 tonnes of E6 low-expansion glass from Japan’s Ohara, and won’t be finished until 2023. It is one of seven petal-like segments that will eventually make up the GMT’s primary collection optics.

Scheduled for first light in around six years from now, the privately funded GMT will be one of the most powerful optical telescopes in the world, able to collect images via the seven-segment primary mirror with an effective diameter of 25 meters.

Casting process
The first of the telescope’s 8.4 meter-diameter segments, whose casting began more than a decade ago, is complete and was recently moved into storage near Tucson Airport – in anticipation of future transportation to the GMT’s site high in Chile’s super-dry Atacama Desert.

The second, third, and fourth GMT mirrors are still being made at the Arizona lab, and should be completed in 2019, 2020, and 2022, respectively.

During the casting process, the glass in melted in a spinning furnace and heated to more than 1100°C, rotating at speeds of up to five resolutions per minute. After it has spent around three months cooling down, the glass disk is precision-polished to its final shape using state-of-the-art technology developed by the University of Arizona.

The final polished surface is required to depart from the desired shape by no more than 25 nanometers. After polishing, the mirror surfaces are coated with a thin layer of aluminum to ensure maximum reflectivity.

Once completed, GMT is expected to produce images a full order of magnitude sharper than the Hubble Space Telescope is capable of – thanks in no small measure to a deformable secondary mirror that will correct for atmospheric distortions with a state-of-the-art adaptive optics system.

Astronomers plan to use the telescope to look directly at exoplanets and some of the most distant galaxies in the universe.

Robert N. Shelton, president of the GMT Organization (GMTO) said in a statement: “We are thrilled to be casting the Giant Magellan Telescope’s fifth mirror. [The] Giant Magellan Telescope project will enable breakthrough discoveries in astronomy, and perhaps entirely new fields of study. With the talents of the team at the University of Arizona and across our entire community, we are taking the next step towards completing the seven-mirror GMT.”

Coarse grinding
The fifth mirror, which began casting November 4, is now one of four GMT mirrors at various stages of completion inside the specialist Arizona laboratory. The lab says that polishing of the second mirror’s front surface is well under way; that coarse grinding will begin on the front of the third mirror shortly; and that mirror number four - the central mirror around which the six "petals" are to be arranged – is next in line for the coarse grinding process.

Of the remaining two mirrors yet to be cast, the glass destined for mirror six has been delivered to Tucson, and mirror seven’s glass is said to be on order from Ohara’s factory in Japan. 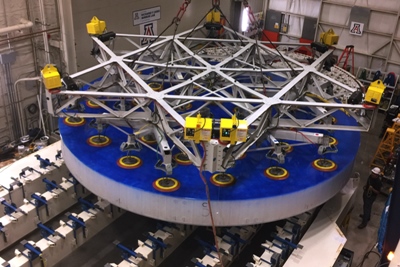 While 2023 is now slated for “first light”, GMTO says that it has already broken ground in Chile, and developed the infrastructure on the site needed to support construction activities.

University of Texas astronomy professor Taft Armandroff, vice-chair of the GMTO Corporation’s board of directors, observed: “Creating the largest telescope in history is a monumental endeavor, and the GMT will be among the largest privately-funded scientific initiatives to date.”

Among the GMT’s founders and backers are the Smithsonian Institution, the Carnegie Institution for Science, Harvard University, Astronomy Australia, and the University of Arizona. Full a full list, click here.

One of the GMT’s primary objectives will be spectroscopic analysis of exoplanet atmospheres – including looking for signs of biomarker gases and oxygen that may signal the existence of extra-terrestrial life.

Key equipment to achieve that includes the Visible Echelle Spectrograph – better known as “G-CLEF” – while the GMT’s visible multi-object spectrograph “GMACS” will be optimized to observe very faint objects and help the study of galaxy evolution in the early universe.