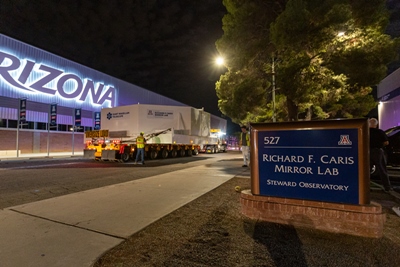 by Ford Burkhart in San Diego
A unique mega-mirror factory in Arizona recently shipped off two 8.4 meter mirrors that will become part of the Giant Magellan Telescope (GMT) in Chile. But with five more to go, nobody celebrated too much, and nobody’s in a hurry: full-speed ahead simply means working 24 hours a day, for 18 months.

“These are long slow, projects,” said Hubert “Buddy” Martin, the project scientist for mirror polishing at the University of Arizona’s Richard F. Caris Mirror Lab. “At that rate we can produce a mirror every 18 months, and the GMT will take until 2024 to assemble. These things don’t change.”

Outlining a history of large telescopes and giant optics, he wound up referring to the current generation of 8.4 meter components as “the 21st century phenomenon,” with adaptive optics built into every design to achieve the ultimate limit of image sharpness.

Astronomy revolution
The gigantic Caris lab in Tucson, which fills – literally, almost from wall to wall – the cavernous space under the university football stadium’s east side seats – has been working on the GMT optics for two decades now.

“We’re excited that we have shipped the second of seven mirrors for the GMT,” said Martin. He expects the project to add an eighth mirror, as a replacement when servicing is needed. Meanwhile, the Caris lab is working on three more mirrors, with Martin saying that the laboratory crew is excited, no matter the pace, about moving ahead with the GMT optics.

“This is the biggest improvement in capability since...well, since forever in astronomy,” he remarked. “We’re now jumping ahead to the ‘ELT’ as the generic standard.”

Aside from GMT the current ELT (extremely large telescope) projects include the European Southern Observatory’s 39-meter diameter design (E-ELT), due to begin making observations in Chile in 2025, and the Thirty Meter Telescope (TMT) in Hawaii, if the project progresses as planned.

“It is really revolutionary in optical astronomy,” Martin said. “Everything is so much more powerful, not just for an increase in size, which brings in more photons, but now we can get extra angular resolution, which means sharper images. We are working up to the fundamental limit set by the wave nature of light.”

He traced a century of breakthroughs, starting at Mount Wilson Observatory in California, that expanded the known size of the universe by a factor of ten, and nailed down the age of the universe at 14 billion years. These were, he said, the biggest changes in astronomical knowledge since Copernicus.

“And the revolution continues,” Martin added. “The 100-inch telescope was good, but the 200-inch at Mount Palomar was even better. In astronomy, the only way to improve is to have a bigger telescope. And each one required a bigger glass mirror than ever before.”

Flat and stiff
Roger Angel, an astronomer at the University of Arizona, came up with a way to make a mirror by spin-casting with a honeycomb structure that maintained the stiffness of earlier mirrors, but at a small fraction of their weight.

And it is that design that became part of the GMT’s seven mirrors, including the five in the works at the Caris lab today. The mirrors are polished to a flatness precision of 5 nanometers, and independently measured for irregularities, something Martin described as the “bread and butter” test of any mirror. “Nobody is going to bet hundreds of millions of dollars without an independent measurement,” he pointed out.

Once all the mirrors have been cast, polished, shipped, and mounted, the new generation of ELTs will greatly increase the range of the search for extra-terrestrial life, Martin believes, expanding the number of exoplanets deemed to be life-hosting candidates. “It’s like nothing ever built before,” he said.

Although actually finding life, Martin added, will require more telescope evolution. “It may not happen in my lifetime,” he said, “but there’s a very good chance it will happen in the next lifetime. There’s no telling what we will learn when we double the size of the telescope.”