NinePoint Medical instrument cleared for use in the pancreas and bile duct. 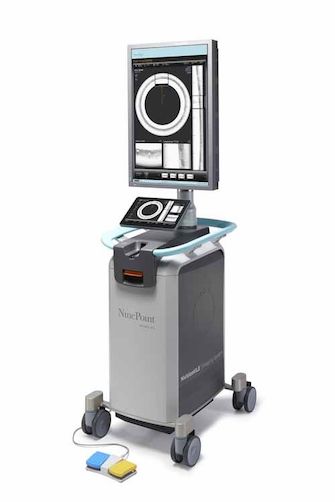 Imaging beneath the surface: NvisionVLE

The US FDA has announced approval for the NvisionVLE optical imaging platform from NinePoint Medical to be used to image the pancreas and bile duct, adding to the OCT platform's existing approval for imaging of the esophagus.

Approval comes just over a year after Massachusetts-based NinePoint Medical announced a strategic partnership with Merit Medical Systems, a manufacturer and marketer of medical devices for several clinical applications.

"The addition of new applications for the NvisionVLE Imaging System is important to demonstrate not just the quality but breadth of value the technology brings to hospitals and patients," commented Fred Lampropoulos of Merit Medical.

NvisionVLE is intended to provide physicians with real-time, high-resolution volumetric images of the tissue surface and subsurface, allowing gastroenterologists to evaluate tissue for regions of interest that may not be visible with other medical imaging technologies.

In the pancreas and bile duct, the ability to see beneath the tissue surface could help physicians answer a number of important clinical questions, according to the company. The newly cleared application in those parts of the body is associated specifically with NinePoint’s Low-Profile Optical Probe product, an imaging probe measuring 7 French in diameter on the accepted catheter size scale, or 2.3 millimeters.

NinePoint Medical launched the NvisionVLE platform in 2013, having switched its focus from Raman technology to OCT in light of advances then being made in OCT by the Wellman Center for Photomedicine.

It specifically adopted volumetric laser endomicroscopy (VLE), a frequency-domain OCT technique based on optical scattering of different tissues, as its preferred method of imaging soft tissues and identifying pre-cancerous areas.

Speaking to Optics.org at the time, then-CEO Charles Carignan said that the company was founded in 2009 "with the aim of identifying and developing a technology that could bring together access, diagnosis and treatment; not necessarily a technology that could actually perform all three, but a way to converge these distinct aspects of care."

For imaging of the esophagus, the OCT implementation in the NvisionVLE system captures a cross-sectional scan to a depth of 3 millimeters beneath the mucosa, at a resolution of 7 microns. It can image 6-centimeter lengths of the esophagus, thanks to a design in which the optical probe is retracted within the tip of a balloon catheter while performing its circumferential sweeps.

In November 2018, NinePoint announced FDA clearance for its Intelligent Real-time Image Segmentation (IRIS), said to be the first FDA-cleared artificial intelligence imaging technology for gastroenterology applications. IRIS is designed to allow real-time detection and colorization of esophageal image features, to aid clinicians in reviewing an image.

Speaking about the latest approval, NinePoint CEO Eman Namati said: "This past year has been especially fruitful, with the clearance and market launch of a first-of-its-kind artificial intelligence technology, and now with the clearance of a pancreatico-biliary application for the Low-Profile Optical Probe. The ability to promote to this new anatomical space really strengthens the platform of the NvisionVLE imaging system, and continues to build the opportunity for this technology to help patients."