Mercury-free technology also suitable for disinfecting brew water, and tops for bottled beer and other drinks. 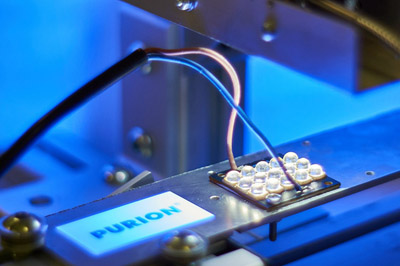 UV light inactivates germs in drinking water. Until now, this disinfection process has typically relied on mercury-vapor lamps, which emit light in the UV spectrum. However, mercury is a toxic heavy metal that can damage both human health and the environment.

Now researchers at the Fraunhofer Institute for Optronics, System Technologies and Image Exploitation (IOSB) in Ilmenau, Germany, are investigating a greener and more efficient alternative, which uses UV LEDs to destroy bacterial DNA. The technology is also suitable for disinfecting brewing water and for disinfecting the caps for bottled beer, soft drinks, and mineral water during the filling process.

To ensure clean water for high-quality beer, brewing companies often install ultraviolet systems upstream of their brewing equipment, to keep the drinking water free of germs. UV light is used because it is effective in killing bacteria, viruses and germs; their genetic material is destroyed by UV.

The brewing water is disinfected by pumping it through stainless steel tubes in which UV lamps have been fitted. UV light with a wavelength of 265nm is especially suitable for this task. Up to now, this UV light has been generated using mercury vapor lamps, which emit light at 254nm.

Researchers at the Advanced System Technology AST branch of the IOSB in collaboration with project partner Purion, are working to replace conventional lamps containing mercury with ultraviolet light-emitting diodes. Based in the German town of Zella-Mehlis, the company manufactures UV disinfection systems for purifying water. The technology is used in water coolers, for example, but also to keep drinks containers such as barrels, bottles and cans free of germs.

“Conventional mercury-vapor lamps emit light at 254 nanometers. As this lies below the optimal wavelength of 265 nm, the disinfection performance is not optimal,” said Thomas Westerhoff, a scientist at IOSB-AST. Further disadvantages of these lamps are their long warm-up phases, their short service lives and the fact that they cannot be deployed flexibly due to their bulky design.

“For these reasons, we prefer UV LEDs, which emit at a maximum wavelength of 265 nanometers. Of particular interest are UV-C LEDs, because their radiation destroys the DNA of the pathogens much more effectively.

“The UV rays generate resonances in the nucleic acids of the DNA and break the bonds of the molecules open. This changes the cell nuclei of the micro-organisms in a way that renders cell division impossible. Consequently, the pathogens can no longer multiply.” 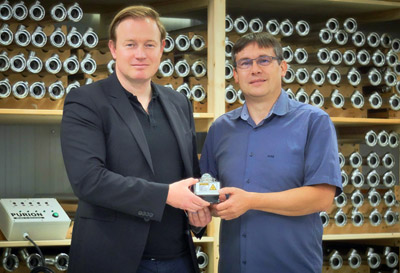 In contrast to the problematic mercury-vapor lamps, UV LEDs do not require any warm-up phase – they reach full power instantly. In addition, they offer high mechanical stability, are non-toxic and will operate at low voltage.

Another advantage is that these LEDs are spotlights. By virtue of their radiation pattern, they offer a wide range of design possibilities. Westerhoff and his team at IOSB-AST are responsible for the design of the LED modules, answering questions such as: “How do the geometries have to be structured?”, “What is the optimum layout of the arrays for a particular use case?”, “How many LEDs are needed?” and “How should point sources with different wavelengths be arranged on the module?”

Following numerous practical tests, the researchers are now able to operate the UV LEDs directly in water without the need for a tube to encase them. Thus they eliminate reflections to further increase the performance yield of the radiation sources.

“We’re able to irradiate the inner surface of the caps with a UV power of four watts. Doing that with mercury-vapor lamps on such a small surface is almost impossible,” says the engineer. The new technology is versatile, and thanks to their small size and high radiation intensity the UV-C LEDs can also be used in medical devices, in order to sterilize liquids, surfaces and difficult-to-reach areas in a targeted manner.