Long-serving executive has worked at the laser company since 1988; global search for successor under way. 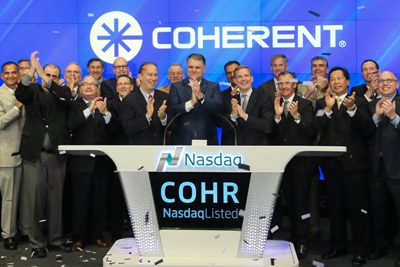 California-based laser giant Coherent has announced that its long-time CEO John Ambroseo will retire from the post within two years.

Ambroseo, who has worked at the Nasdaq-listed company for 31 years - more than half of them as its lead executive - is set to remain with Coherent under a “transition service agreement” while a successor is sought.

“Throughout my nearly 17 years as CEO of Coherent, I always try to take the long view on the markets, technologies and the company,” Ambroseo said in a company release. “I believe this approach allows us to make better decisions benefitting all stakeholders, but this also requires a trade-off between professional and personal priorities.

“Having considered this, I want to shift my long-term attention to my family and philanthropic pursuits.”

Smooth transition
Ambroseo added that he was fully committed to making the transition as smooth as possible, as the Coherent board begins a global search to replace him.

Garry Rogerson, the chairman of Coherent’s board of directors, said: “On behalf of the Board I would like to acknowledge and thank John for his many contributions and strong leadership of the company to date.

“The Board is appreciative of John's willingness to provide us with up to a two-year runway, which enables us to move forward promptly with a thorough search and provide sufficient overlap to best position John's successor to build upon our solid foundation to take Coherent to the next level.”

Ambroseo, who earned a PhD in chemistry from the University of Pennsylvania, first joined Coherent back in 1988 – initially as a sales engineer before rising through the ranks in various roles before becoming director of the firm’s European operations.

In 2000 he was appointed an executive VP and general manager of the Coherent Photonics Group, before stepping up to become the company’s COO in 2001, and then CEO just a year later.

Key acquisitions
As lead executive, Ambroseo has overseen a dramatic increase in Coherent’s annual revenues - partly through acquisitions, and partly through organic growth as the company’s lasers have moved beyond the laboratory to penetrate a variety of lucrative commercial markets.

Key moves have included the 2003 re-acquisition of its excimer laser business previously known as Lambda Physik, whose powerful ultraviolet sources are critical to an annealing step in the production of flat-panel displays, the $376 million cash acquisition of electro-optics firm Excel Technology in 2006, and the near billion-dollar deal to buy industrial laser rival Rofin-Sinar completed in late 2016.