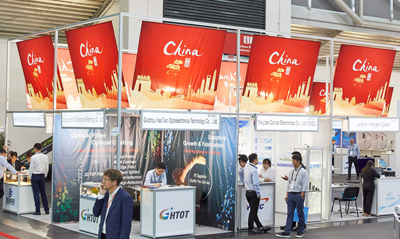 Chinese photonics companies have a significant presence on the LASER expo.

For many years China’s laser market has been a golden opportunity for globally-trading laser makers supplying what has been the country’s booming manufacturing sector.

But the traditional picture of an apparently endless demand for lasers and an under-developed domestic laser manufacturing industry is changing fast, as was described by Wednesday’s China Industrial Laser Market Update, given by Dr. Qitao Lue, CTO at Han's Laser Technology. Dr. Lue was a key speaker at the 14th International Laser Marketplace day conference, organised by Optech Consulting.

Dr. Lue started positively: “For the 13 years to 2018, China saw unbroken growth for sales of laser technologies and especially in the past several years growth has been steady with market drivers being smart phones, sheet metal cutting, electric cars and, very recently, display technologies and the processing of transparent materials.”

According to his analysis last year, 2018, the total laser market in China reached a peak of $5 billion sales. But 2019 is looking like the start of a significant change in market direction. Dr Hue told the conference: “For this year, 2019, I would expect that China will experience a sales downturn of 15 or even 20 percent from last year.”

He also noted that Chinese laser manufacturers and systems integrators have now become “stronger and stronger” meaning fewer laser systems are now being imported into China, especially at lower powers. But he also noted that this local strength was over-ridden in 2018 when there was a jump in imports mainly due to the display industry and semiconductor industries meaning more laser machines were imported from South Korea, in particular.

Applications driving exports have diversified since 2000, as China has increased its range of laser types and powers: “From 2002-2006 marking; 2003-2008 marking PC keyboards, based on DPSS lasers, then applications to cutting and soft materials and from 2009 more and more lasers systems used for manufacturing smart phones,” he explained.

“Then from 2010 more lasers for sheet metal cutting especially multi-kilowatt fibre lasers; and then in the past five years producing electric cars; and in the past three years displays OLEDS, LEDs, which require ultra fast lasers.”

As the national manufacturing capability improves, Dr. Hue believes that China’s imports will be reduced. “Chinese laser integrators and companies are now offering excellent customer service and cost advantages and stronger integration and automation capabilities. Therefore I think it will become even more difficult for systems integrators from abroad to service end-user clients in China,” he said. 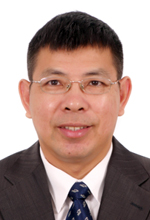 He then moved on to a broader look at general business trends affecting China’s laser sector: “Everybody knows that there is trade conflict between China and the US. This means that currently many big contract manufacturers are moving their production capacity out of China so I think that wider South East Asia will be come very important in the future as a laser marketplace.

Another opportunity for China and other suppliers is the Chinese Government’s One Belt One Road Chinese initiative, which includes 26 countries. The population along these 81,000 km of railway is almost two thirds of the world’s people. So OBOR is expected to open up new export opportunities for Chinese manufacturers.

Dr. Hue commented, “In my opinion laser manufacturing will play a significant role as OBOR develops. But for the near time [at this point he presented various photos of Presidents Trump and Xi, both smiling and unsmiling] there is still a good deal of uncertainty in the market.”