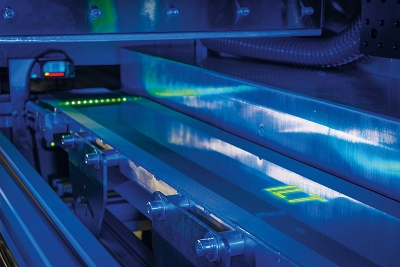 A new development project led by Fraunhofer Institute of Laser Technology (ILT) in Aachen, Germany, is employing a variety of laser steps, including ultrashort-pulsed scribing, in a bid to help industrialize organic photovoltaics (OPV).

While OPV offers the potential for energy generation with a low-cost and flexible technology, its relatively low conversion efficiency and difficulties scaling up production to make large-area panels have limited commercialization thus far.

The “EffiLayers” project is aiming to make a breakthrough, partly by replacing expensive sputtering processes for coating steps with a wet-chemical approach.

But a femtosecond laser scribing process is also set to play an important role. Ultrashort pulses are able to separate layers such that individual cells can be connected in series.

Laser processes
Fraunhofer ILT researcher Ludwig Pongratz explains: “With laser scribing, we guide eleven partial beams onto the surface while the film moves. The laser beams selectively separate the composite layers so that, at the end, twelve serially connected sub-cells are produced on a single film. The challenge is to selectively ablate the individual nanometer-thick layers without damaging the underlying layers or causing short circuits.”

Ultimately, the plan is to implement the process in a way that would be suitable for industrial transfer, added Pongratz.

Aside from the laser scribing step, functional layers will be applied on top of each other via wet-chemical solutions and heated slot-die coating. Lasers are involved here as well, with the 10-250 nm-thick layers processed using a variety of short-pulsed and ultrashort-pulsed sources.

“In the continuous process, the laser drying and laser thin-film ablation are used to separate individual cells as well as to remove layers in the edge area,” states the ILT team. “The OPV cells are then sealed by laser encapsulation with a barrier film to protect them from environmental factors.”

Spoonful makes a ton
One of the main theoretical advantages of OPV is how little active absorber material is needed in the panels. Pongratz says: “To produce OPV cells with an area of ten square meters, we only need three grams of organic active material."

He added: "Because we were able to successfully implement many innovative process steps into our plant in the first two projects, the funding of a third project was approved with funds from the European Regional Development Fund (ERDF).”

The earlier projects showed that it was possible to scale a roll-to-roll production process to industrial volumes, at a lower production cost than traditional silicon photovoltaic panels.

Although OPV is significantly less efficient than silicon-based solar, the flexible and transparent nature of the newer technology offers much greater scope for functional and decorative integration into building facades.

“By developing an efficient production process, the partners intend to boost the industrial mass production of OPV cells,” states the team.