Around 185 m2 of Heliatek's OPV films have been installed on a warehouse of inland port Duisburger Hafen. 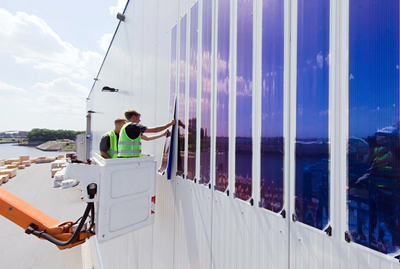 With a total length of almost 600m, the largest organic photovoltaic façade installation so far has been installed in Germany using Heliatek's HeliaSol film panels.

Around 185 m2 of Heliatek's organic photovoltaic films have been installed on the façade of a warehouse of German company Duisburger Hafen. The development is part of an agreement called Drehkreuz Energiewende, made between Duisburger Hafen and energy company innogy in 2016.

HeliaSol is a lightweight, thin and flexible solar film that is produced in a roll-to-roll process in Germany. Equipped with a self-adhesive backing, the film can be applied directly to a variety of surfaces without further assembly.

With the project in Duisburg, the solar films were glued directly onto the metal facade of the warehouse. Ventilation or cooling is not necessary as the films do not lose power or efficiency at high temperatures, unlike crystalline solar technology.

In the Duisberg installation, the solar films generate about as much energy as a 5-person household would consume annually. Due to the efficient use of materials and manufacturing process, the solar films produce 80 times more energy over their lifecycle than is needed to produce them. When compared to the CO2 emissions of various other types of energy production, Heliatek says its solar films provide the lowest CO2 footprint, with 20g CO2 per kWh.

Duisburger Hafen is the operator of the world's largest inland port and intends to position itself as a major hub for the energy transition. The construction of the solar facade is one of four areas of cooperation and a large number of measures implemented between innogy and Duisport for a successful sustainability strategy. 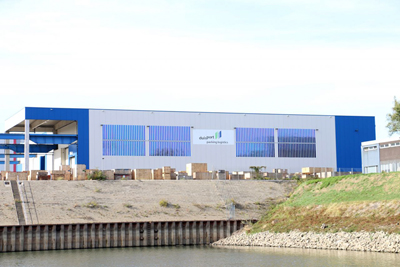 Newly installed: the organic photovoltaic facade at the port of Duisburg. I

Alexander Garbar, Project Manager Corporate Development, Duisburger Hafen, commented, "Heliatek's photovoltaic solution is really fascinating, and we are pleased to have brought a German manufacturer on board. We are curious what the outcomes will be in the coming months."

With the inauguration of a new production facility in 2020, Heliatek states it is committed to "actively shaping the future of a decentralized and decarbonized future". Following a successful test run on the Duisburg port site, there is the potential to use up to 10 million m² of façade and roof space for the production of solar energy.

Martin Neweling, Project Manager Group Strategy at innogy, said, "We are pleased to have created another eco-friendly solar façade with Heliatek in Germany. The building exterior of Duisport received a second skin, one that generates energy. With each new project, we are gaining experience in installation. The current installation time per film is just a few minutes, which is impressive."

With the German Government's goals of achieving a virtually climate-neutral standard of buildings by 2050, the premises for this industry are being set in Germany. According to the Heliatek statement, buildings cause about one third of all CO2 emissions and total energy consumption in Germany.