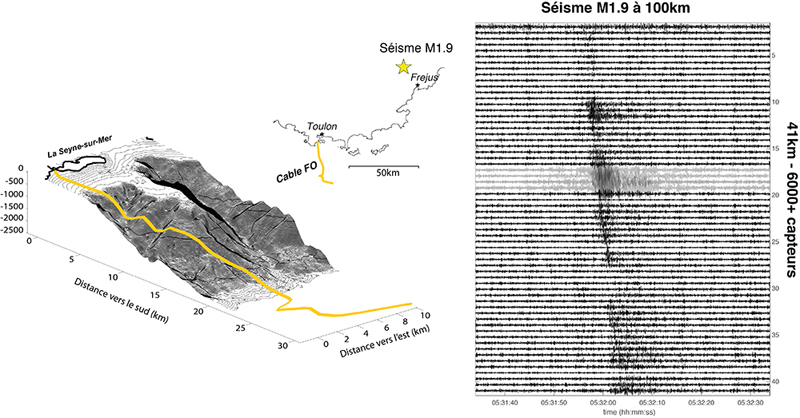 Scientists have for the first time shown that it is possible to detect the propagation of seismic waves on the seafloor using submarine telecommunications cables. According to their observations, this existing infrastructure could be used to detect earthquakes, as well as swell and underwater noise.

The results are published in Nature Communications by researchers from the CNRS, OCA, IRD and Université Côte d’Azur working together in the Géoazur laboratory, in collaboration with Fébus Optics and the Centre de Physique des Particules de Marseille (CNRS/Aix-Marseille Université).

The ocean floor is criss-crossed by 1.2 million kilometers of telecommunications cables made up of optical fibres, which facilitate much of our communications. However they could soon take on a new role, that of detecting acoustic and seismic waves, say the researchers.

The scientists used a 41 km-long cable deployed off the coast of Toulon in southern France to retrieve data from the sensors of the MEUST-NUMerEnv2 underwater observatory, located at a depth of 2500 m. The method they developed takes advantage of small impurities in the optical fibers, which return part of the light they carry back to the transmitter.

By stretching or contracting the fiber, the passage of a seismic or acoustic wave alters the distance between these impurities, and thus the backscattered signal, by a tiny amount. The team needed to prove that these differences were detectable since, in submarine cables, the optical fibers are protected by several insulating layers.

Animation showing the effect of swell recorded along the first eight kilometres of optical fiber.

By injecting pulses of light into an optical fiber and analyzing the backscattered signal, the team converted the 41 km of optical fiber into more than 6000 seismic sensors. A magnitude 1.9 earthquake that occurred during the trial was detected at each of the measuring points with a sensitivity close to that of a coastal seismic station, even though it was located over 100 km from the cable.

Furthermore, the measuring points are also sensitive to waves that travel through the ocean, such as those produced by swell. The authors recorded the impact of waves on the seafloor near the coast, as well as their effect on the abyssal plain, where they generate what is known as “seismic background noise.”

The sensors made it possible to observe for the first time how these very small vibrations, which constantly interact with the Earth’s interior, are produced, enabling geophysicists to probe its structure. The researchers believe that an optical telecom cable could in the same way detect underwater noise produced by ships and cetaceans (whales, dolphins and the like).

The researchers conclude, “Faced with the logistic and financial challenge of deploying instrumentation on the seafloor, telecom cables could provide a way of improving our understanding of this terra incognita covering two thirds of the Earth’s surface, and address a wide range of scientific and societal issues, such as earthquakes, coastal erosion, interaction between life, the oceans and the solid Earth.

“A certain number of cables currently in operation will be phased out by telecommunications operators over the coming years. Thanks to this research, they could soon take on a second life.”