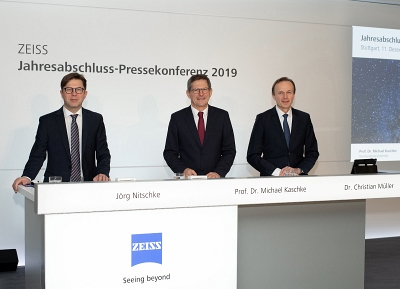 Optics bellwether Zeiss has posted record revenues for the tenth year in succession, thanks to solid growth across each of its diverse set of business units.

For the 12 months ending September 30, the Oberkochen-headquartered company said sales jumped 11 per cent year on year, to €6.4 billion. The currency-adjusted figure showed an 8 per cent rise.

That performance carried through to the firm’s bottom line, where Zeiss delivered earnings before interest and tax exceeding €1 billion for the first time in its history.

Orders up again
Back in December 2010 - shortly before current CEO Michael Kaschke took over - the company's annual sales stood at just under €3 billion, meaning that both sales revenues and earnings have doubled during his tenure.

And despite wider concerns of a slowing global economy Zeiss also reported a healthy 9 per cent rise in orders, to €6.6 billion.

“All Zeiss segments have developed extremely well,” remarked Kaschke in a company announcement. “This is quite remarkable, especially in the midst of an uncertain economic climate and profound structural change in different industries.”

Leading the way in 2019 was the medical technology division, where Zeiss’ sales jumped 14 per cent to €1.76 billion. That makes it the company’s largest business unit by sales.

Next is the “industrial quality and research” unit. Despite suffering from close alignment with the moribund automotive industry, it still grew 12 per cent to €1.74 billion - thanks in part to the April 2019 acquisition of optical metrology firm GOM.

“The microscopy business has stabilized and exceeded expectations,” Zeiss noted.

The semiconductor sector, where Zeiss is a key player thanks to its lithography optics expertise, contributed €1.63 billion to Zeiss' annual sales. That represented a 7 per cent year-on-year jump, with the business unit benefiting from the surge in demand for ASML’s extreme ultraviolet (EUV) systems.

“The first premium end devices with chips produced using Zeiss EUV optics are already available on the market,” points out Zeiss. In 2016 it agreed a strategic investment deal with ASML that is intended to ensure successful development of next-generation reflective optics for even more advanced EUV lithography systems.

Carbon plan
At €1.2 billion, sales to consumer markets - which includes high-end photography lenses - were up 9 per cent, although this now represents the smallest of the four Zeiss divisions.

Zeiss continues to plow money into its research and development activities, which at €705 million still represent more than 10 per cent of sales.

It is also pursuing what its CFO Christian Müller describes as a “targeted innovation strategy, combined with substantial expenditures and investments”.

“We are always on the lookout for partners with whom we can expand our technology and software expertise,” added Kaschke. “This enables us to focus on opening up new fields of technology and drive strategically important digital projects within the Zeiss Group.”

Like its compatriots Trumpf and Osram, Zeiss is also looking to improve its environmental credentials. The company says it is “on the path” to carbon neutrality, and has pledged to switch to a CO2-neutral energy supply in Germany by 2022.

“We are making a real difference by implementing a great number of concrete measures to reduce CO2 emissions and protect the climate,” Müller claims.

Now employing more than 31,000 employees - who Kaschke refers to as “Zeissians” - the company is also set to pay a dividend of €75 million to the Carl Zeiss Foundation, its sole shareholder. 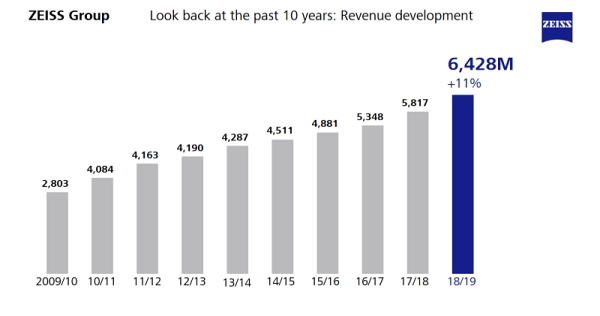